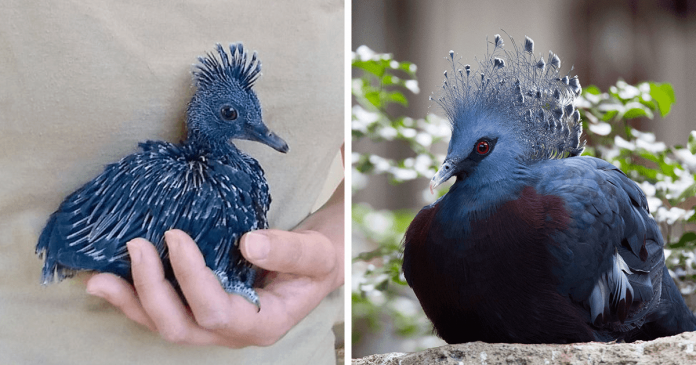 The Victoria Crowned Pigeon looks like it comes from a royal family. It has bright blue feathers and a beautiful crown on top of its head. Goura family is one of four extraordinary ground-dwelling pigeon species and the bird belongs to it. With their large size, they can reach the size of a turkey.

The bird is native to the New Guinea region. British Queen Victoria was the ruler of the United Kingdom in the last decades of the nineteenth century. The bird got its name to commemorate her.

As they are the least occurring of all the three crowned pigeon species and yet are most widely bred in captivity, these species are hard to spot wandering wild. One of the biggest threats to their habitat is Deforestation. The species is included in the IUCN Red List of Threatened Species as Near Threatened.

Female bird species lay just one egg per mating season. It isn’t even much of a help for their survival. They have a complex mating dance as someone could expect from such a fancy, royal-like bird.