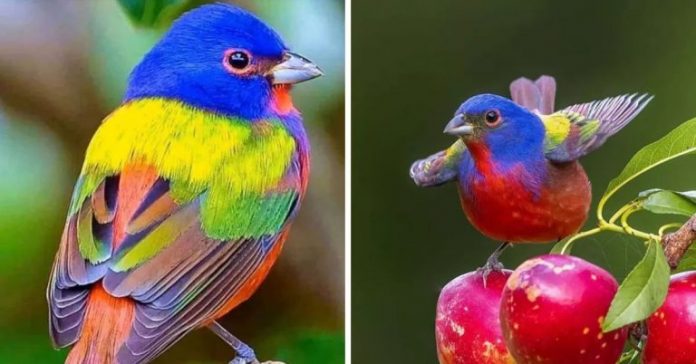 We forget to get to know our country’s nature and appreciate it as we should. But we constantly admire other country’s beauty and nature.

This Painted Bunting bird is a species of Cardinalidae birds, in the cardinal family. The bird lives in South America and Mexico.

They are a vivid fusion of red, yellow, green and blue. These birds are also secretive and shy birds that stay low. They choose roadsides, gardens, woodland edges and hedgerows to live.

Most of the times, they spend their time in dense bushes searching for seeds. So, the bird cannot be seen easily. But you can attract them by placing a feeder low to the ground and near some bushes. They love eating seeds from native grasses.

They can also be found in Arizona, Louisiana, Texas and Oklahoma during the breeding season. They come to Mexico in the winter.

Males are very territorial during the breeding season. In order to defend territory, they sing from a raised perch. Males actually start physical fights in conflicts.

The French name for these birds means “without equal.” They are called “Nonpareil” too. This bird is often referred to as the most beautiful bird in North America.

But, according to the studies their number has declined recently.