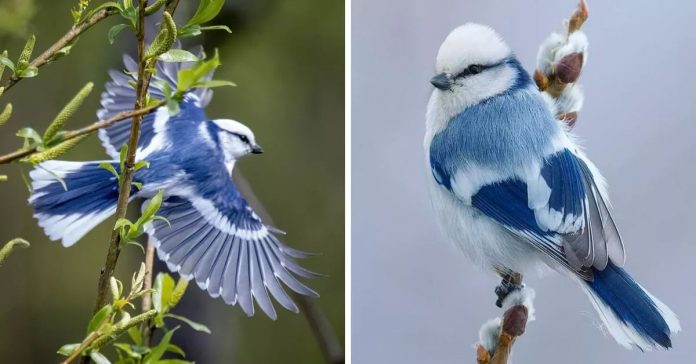 Colors are very beautiful, especially in nature. But there’s something about pure white that draws our eyes and the heart.

We have felt it at one time or another. That perfect glisten of fresh snow, the majesty of a white tiger, the grace of a snowy owl, everything consist of an extra special something.

The white backdrop makes those spots really pop if a mostly white creature has a few spots of any color.

The Azure Tit shows off that effect very beautifully and cutely.

Azure Tits grow to an average of four-to-five inches.

They are in white, with various shades of blue along their backs and a distinctive blue stripe across their eyes. In the center of their bellies they have a blue patch too.

They can be found throughout Russia and Central Asia, and also northwestern regions of China, Manchuria, and Pakistan.

They are like the Eurasian Blue Tit, which is considered its own species. Blue Tits can be found throughout northern Europe and they live with Azure Tits in some areas.

But, they have bright yellow chests and bellies.

With the hybrid babies having varying amounts of yellow in their feathers, the two species can interbreed.

Hybrids which were once considered a distinct species are called Pleske’s tit. But, they have since lost that designation.

Azure tits have no signs of danger and currently safe from extinction. Their large brood size helps with population. They hatch an average of 10 eggs safely within the holes of trees.