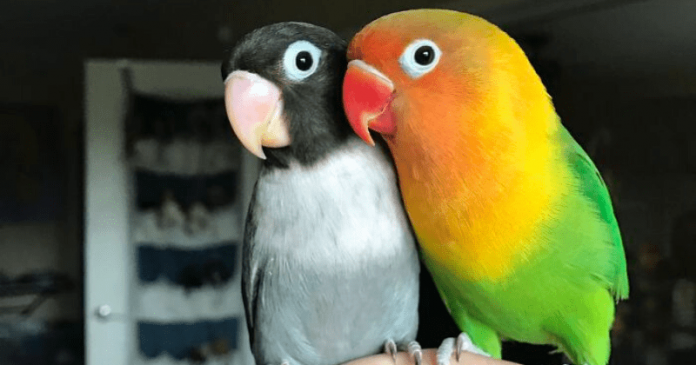 The cutest bird couple has produced some equally cute offspring.

Those wonderful stories have to share with the world as they can bring a smile on our faces most especially during dark times like these. This story was shared by 19-year-old Maura T about cute lovebirds on Twitter. They made us believe that opposites really do attract.

Remember Kiwi & his goth gf? Well now she’s his goth wife and they have 4 beautiful half goth babies ??? pic.twitter.com/vX21428mk0

The Kiwi, the bright, colorful boy lovebird was getting sad and lonely in mid-2017. Maura noticed that and she got him a lovebird. But it didn’t quite work out. Maura, later on, got him Siouxsie, a ‘goth’ girlfriend, and Kiwi was very happy with it. It was love at first sight for both of them. The lovely couple stole the hearts of many. Maura later shared the Siouxsie was about to lay eggs and later that they had four adorable baby parakeets. Maura wrote on Twitter, “Remember Kiwi & his goth gf? Well now she’s his goth wife, and they have four beautiful half goth babies.”

Also I will be adopting out the babies to good homes in another month or so when they are weaned! Feel free to DM me if you are interested in adopting one (and if you’re a Cali local) ?

Maura was Sreally happy to see their 4 babies. All four of Siouxsie’s eggs hatched safely and how they looked was a really amazing surprise for everyone.

Maura wanted to see if the babies will inherit the father’s vibrant feathers or they will share the greyish and gothic color of Siouxsie. We couldn’t make out their features in the beginning, but we can get to know soon.

I love them so much pic.twitter.com/AvJBorOph0

The chicks turn out to be as incredibly beautiful day by day, and they took after both their parents. Kiki and Siouxsie’s love story is unconventional and we also can have the hope that even our perfect partner is somewhere out there.

Their color shows how strong their union is. Twitter was amazed by this lovely family. One person wrote, “One of the purest tweets I could see, I remember them! Now they are proud parents, it’s amazing ^^ I shall draw them when I have some time !” Another said, “This makes me so emotional. I think I’m going to need to call my therapist and get her a therapist after showing her this pic because of holy shit. I have never seen anything more perfect.” A third one quipped, “Aww I remember when I was like four or five my parents told me if I could say all my numbers and ABCs I could get a bird. Well, to this day I”m literate and still holding them to that promise.”