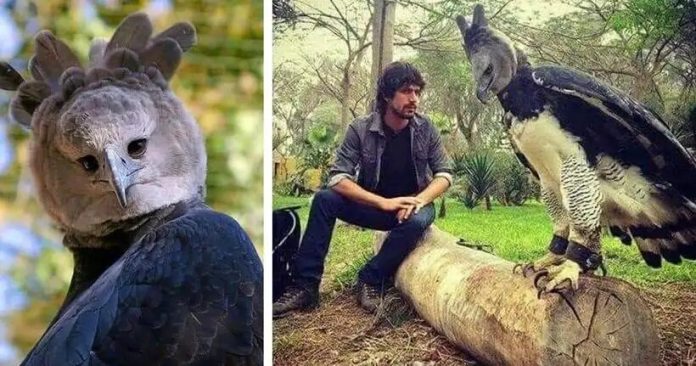 You won’t believe the size of the Harpy Eagle. The Harpy looks downright regal with its crown of raised grey feathers, beautiful eyes, expressive face, and feather collar of black and grey apart from its impressive size. This bird has the ability to reach up to 3 feet in height with a wingspan of up to 7 feet.

A female Bald Eagle is weighed up to 12 pounds while the female Harpy Eagle weighs between 13 and 20 pounds. Female eagles are heavier than male counterparts. A male Harpy would weigh almost half the weight of the female at her heaviest between 9 to 13 pounds.

The upper canopy of tropical lowland forests, stretching from Mexico to Brazil and northern Argentina is the Harpy Eagle’s natural habitat. Their wingspan allows them to navigate through the forests as they are shorter than other eagle species.

? the Harpy Eagle from r/NatureIsFuckingLit

The males and females can be identified in appearance from its raised feather crown to its large, powerful talons apart from size. The rear talons of the Harpy are bigger than the claws of a Grizzly Bear which measures 5 inches in length.

Due to their immensely powerful talons, the Harpy is at the top of the food chain in the forest. As they have enough strength to catch and carry small animals weighing as much as 17 pounds, their favorite meal is sloths and monkeys. They save energy for their hunt and they don’t soar for long distances as other eagles do. They’re also not very vocal and they sit on a lookout perch for hours waiting for unsuspecting prey to appear. Their speed is up to 50 miles per hour. For a successful catch, their silence is more than enough.

But the sad news is that Harpy Eagles are becoming increasingly rare across Latin America due to deforestation and sighting. Harpy Eagles are monogamous and raise just one eaglet every two years which means that even a small decline in numbers can negatively affect population recovery like many birds. Their loss in some environments will negatively affect the ecosystem as the Harpy naturally keeps the populations of animals like Capuchin monkeys in check. When the monkeys steal eggs from a birds nest to eat it will continue the spiral of destruction, causing the extinction of other species.