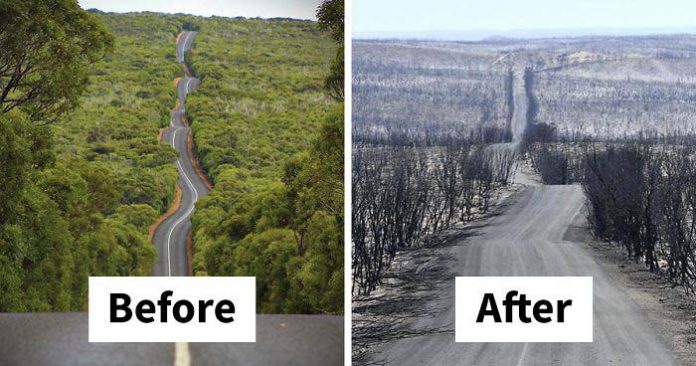 Words cannot explain the current situation in Australia. According to the estimations, since the fires first started, a whopping 10 million hectares of land have been destroyed. While firefighters are doing their best to fight the fires, countless homes, animals, and their habitats have been destroyed by now.

There are photos sharing on the internet of areas affected by the bushfires to help illustrate just how extensive the fire damage across Australia and that is truly horrifying. It looks like the very gates of Hell have opened because of the acres of burned down trees, destroyed homes, and bright orange skies.

#02. Tathra Beach, NSW In Australia. Before And After The Smoke And Ash From Surrounding Fires Arrived. The Black Debris In The Bottom Photo Is Charred Wood And Ash Washed Up On The Shore

#05. 2 Hours Before vs. 3 Days After. This Is The Devastation Left By The Fires In Sarsfield, Victoria. Still Can’t Believe The House Still Stands

#06. Blue Mountains, Australia – Before & After

#10. Wildlife Sanctuary In Canberra, Au Before And After Fire

#11. Blue Mountains, Australia – Before & After

#12. Before And After For One Australian Family

#13. Australia’s Smoke From The Bush Fires Means You Can’t See Mt Cook In New Zealand. Look At The Before And After Pictures

#14. Before And After Of Sydney Due To Smoke From The Rampant Bush Fires

#15. The Scenic Town Of Mallacoota

#16. This Is Cobargo, Before And After Today. This Is… Unbelievable

#18. This Is The View Today Compared To The Same Time Last Year Where We’re Staying In Merimbula With Our In-Laws For Our Summer Holiday. We Can Hear Firefighting Helicopters Landing At The Airport Below But Cannot See A Thing

#19. The Same Day… Before And After Of The Tianjara Fire Burning In The Shoalhaven