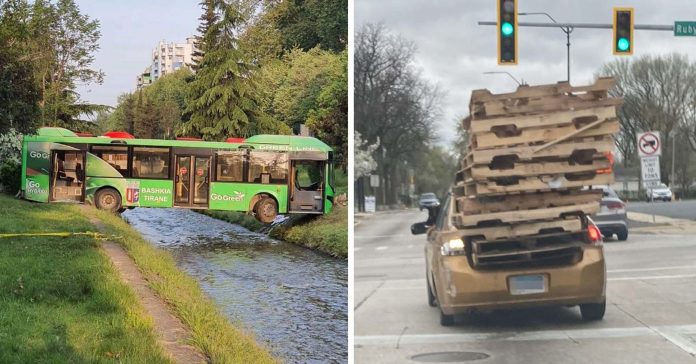 A car is a very useful tool that allows us to transport ourselves comfortably and carry loads that would be impossible on foot. Without a doubt, automobiles have come to make life easier for us, but at the same time they can make it a little more complicated. Sometimes driving can be more difficult than it seems because you not only have to concentrate on running the machine but also pay attention to everything around you.

Each driver has their own style and many times, cars reflect the personality of their owner. You have probably been on the road and when you look at a car you can imagine what the person driving it is like. Some are bold and reckless and dare to do extraordinary things with their cars; like carrying a cooler on the roof, for example.

These types of drivers are pretty easy to spot, and in fact, you don’t want to drive too close because you might be in for a not-so-pleasant surprise. Still, seeing the extraordinary yet reckless things they are capable of causes some laughter.

Take a look at some drivers who should take driving lessons again.

1.A foolproof method so that no other vehicle gets closer than two meters

2.When you don’t want to go around several times

3.He did not want to miss out on the best parking space

4.The good thing is that you can see through the gaps

5. When there is no bridge to cross so you decide to become one

7.He wanted to jump the traffic and jumped onto the train tracks… Now he created rail traffic

8.Blinding light so that nobody loses sight of it

9.Super safe transportation with four hands to hold the package

10.Why paint the car when you have tape?

11.For a trip in full contact with the environment

12.This is more common than it seems

13.When you have a small trunk but that doesn’t stop you

14.Parking is harder than you think

15.When you turn your motorcycle into a bus