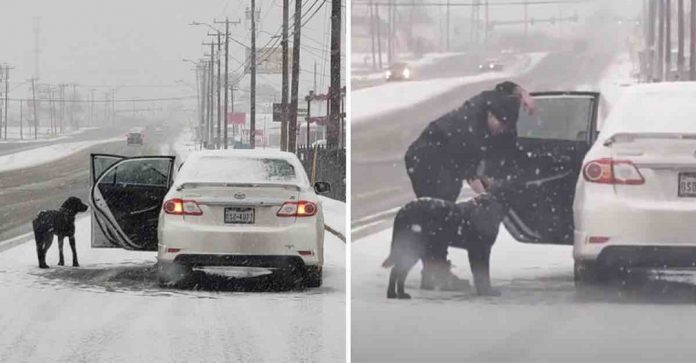 At the beginning of the year, the winter storm Uri appeared together with the pandemic. The extremely cold temperatures that became part of the norm, along with snowfall and the presence of completely frozen sectors in several cities in the United States. Possibly, one of the most affected states was Texas, which is a place where there is no habit of such icy climates. Being stronger, he was beaten. Since they do not have the infrastructure or the preparation to face a reality that has endangered not only people, but also all kinds of animals .

And if there are living beings that tend to be the most affected in whatever adverse situation, those are the ones that are abandoned. Like stray dogs, now more than ever in danger. Due to the cold days, which above all feel and hurt more in the harsh weather. But luckily, for many of them, there will always be people with a good heart who help them by lending a hand. Being one of them, Kristin Salinas, 28 years old, who after going out to do some shopping, found a dog visibly frozen and in the middle of the road .

If she didn’t do something, this animal would die from being run over or from hypothermia due to the extreme cold there was. For what Kristin saw, she did not hesitate and immediately stopped the car to try to get it up. She opened the door for him and offered to get in, but this dog surprisingly refused . He was apparently quite mistrustful of humans, and it’s not surprising, after all he’s been through . However, Kristin did not give up and using some tasty tortillas she managed to attract him and convince him to get in the car.

According to what was reported to the news, both this American woman and her partner, Nicole, have dedicated many of their hours and energy to rescuing dogs and cats that are abandoned in the open . To later be able to provide them with a space in their home or give them up for adoption to a responsible family. ” We had never been through this snow and like this, so we knew we definitely had to bring this dog home .” This is what Kristin Salinas said, before posting a photo of this rescued Labrador retriever to a group of lost animals on Facebook, asking that a family adopt him and give him a loving home .

Below you can see the video where Kristin is seen with the puppy trying to get him into the vehicle:

Share this rescue video with your friends and family. So that more people take an example of helping those most in need.