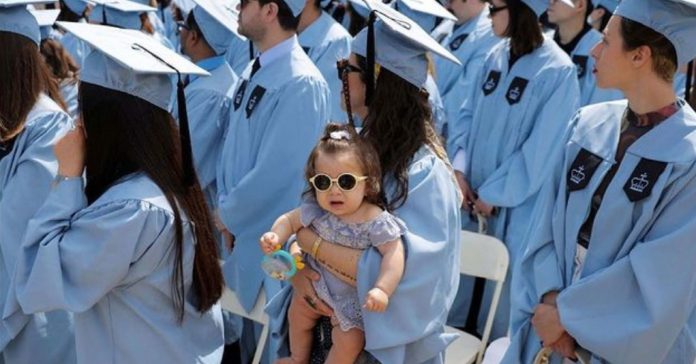 She is proud to be a mother and to have finished her studies.

The news that we will soon become a father or mother is revolutionary. Knowing that a baby is on the way, our entire world is completely transformed and we must readjust our lives because soon there will be a new little person demanding all our attention.

However, this does not mean that we can no longer do other things like study and finish a university degree. There are many examples of people graduating as parents and with a full-time job, and they are all inspiring in their own way. But the following story draws attention because the woman decided to attend the graduation ceremony carrying her baby throughout the event.

She is Julia Pontés , an Argentinian-Brazilian environmental researcher, activist and photographer. The 39-year-old woman recently became a mother. She felt that the right thing to do was to involve her 8-month-old daughter, Stella Lyra, in the academic act.

At the Columbia University graduation in Manhattan, New York, Julia held her daughter in her arms and also walked up the stage with her.

The Reuters website shared the curious image of the woman in her cap and gown with her other colleagues and hugging the little girl. Soon the tender moment went viral and the woman wanted to tell her story on her Instagram account.

“Only a few people know that a mother was born in me just under a year ago. I got pregnant while documenting the abuses of mining companies in the communities near Belo Horizonte during the pandemic, while taking online classes »Julia began her story.

With all these situations like a movie, the woman took the last flight to Argentina to quarantine in that safe place and continue her studies at Columbia. She even mentioned that at the time she didn’t have a roof to sleep under, but that didn’t stop her. Despite all the difficulties, she managed to be a student, a worker and carry her pregnancy.

“Columbia has always been the school of my dreams. But being pregnant and being a mother (alone) turned out to be quite a challenge,” she continued.

Julia said that the doctors at the university did not treat her because her pregnancy was already advanced and she also had problems with her insurance. Added to this, she had to deal with her student loan and the father of her daughter was not supporting her.

In fact, she became a single mother since shortly after she got pregnant, the man became rude and vi0lent. Julia made the decision to separate and continue on her own; but she hadn’t spoken about it out of fear.

Fortunately, her family and friends supported her so that she could exercise her motherhood and also continue with her studies. Ella Julia She has been researching mining for 8 years and at university she took classes in related areas.

“It wouldn’t make sense not to have my daughter with me at my graduation, as she is the crowning achievement of my life.” she assured.

For Julia, having shared that moment with her daughter is proof that anything is possible. Her intention has never been for other people to feel sorry for her situation, quite the opposite. She wanted to show other single mothers and/or immigrants that even if it’s hard, she can do it.