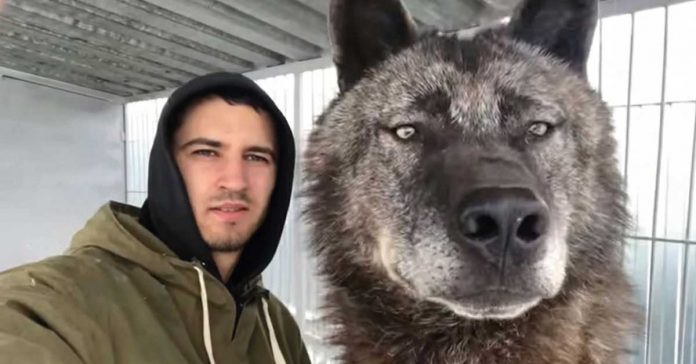 The boy managed to “tame” a gigantic wolf and now they are inseparable.

Thousands of years ago, human beings began to domesticate animals, the dog being one of the first wild animals to become faithful companions of our species. It is believed that from the wolves of Southeast Asia, those 4-legged animals that we know as dogs arose. And since then they have been an important part of our lives, so much so that we cannot imagine what it would be like without them.

There are many people around the world who undoubtedly love dogs and try to have one or more at home as an excellent company. But there are those who are not such fans of these furry friends and prefer to have other types of pets, some equally domesticated such as cats, or other exotic ones such as birds, reptiles, insects and other mammals.

Any pet you choose is fine, you just have to make sure it has everything it needs for a good life, especially if it’s a wild one. But there are those who go much further and decide to have large predators, such as lions, tigers or a wolf.

Andrey Musienko is a boy from the north of Russia who decided to adopt a wolf as a pet.

And this is not the only surprising thing because the young man assures that Akela, his wolf, acts like a pet. He says that she behaves practically the same as a domestic dog; with a slight difference in size. Akela is huge but she is his faithful companion and they spend every day together, playing and showing affection.

The home of this pair is Siberia, a region well known for its low temperatures as well as little flora and fauna capable of withstanding extreme cold. The most common species in the area are birds and large, furry mammals such as the Siberian tiger, the snow fox and, of course, the wolf. These animals are wild and good hunters, so naturally they would not be the ideal pet; however, Andrey did not care and decided to bring a she-wolf to his house.

Andrey met Akela when she was a little puppy and immediately knew that they would be good friends. As expected, time passed and Akela became a beautiful and majestic wolf with a height of more than half a meter at the withers. And in those years her size was not the only thing that changed because she also learned to behave much like a common domestic dog would.

Experts say that having wild animals is dangerous because you never know when they might let out their instincts and forget about their “domestication”. But Andrey doesn’t care about that; he fully trusts his best friend and ensures that Akela always behaves well.

The young man is aware of the needs of a wolf and tries to cover them all; He even raised funds to adapt his backyard to an environment as similar as possible to Akela’s natural habitat. Now Andrey shares content on Youtube and Instagram about his life with a wolf and already has almost 100 thousand followers. Although of course, what draws the public’s attention is Akela, for her beauty and exoticism.

Without a doubt, it must be a very peculiar experience living with a wolf every day. But as Shakira already warned us, if a she-wolf is in the closet and wants to come out, she will eat the neighborhood before going to sleep.