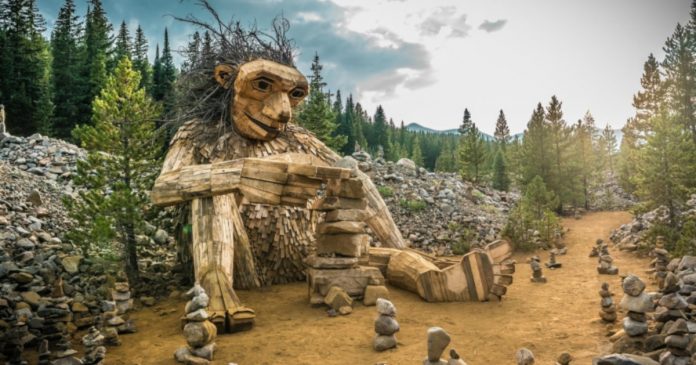 An artist from Denmark, Thomas Dambo is making the best out of waste and recycling trash into magnificent statues.

Most of the people are busy in littering and exploiting the beauty of Earth. They don’t think that it’ll be the end of us all if we don’t change our ways soon. This Danish artist’s story is a slight ray of light in our very dark future. This is a good start to save our planet. This great artist collects the trash and unwanted items from around the city and turns them into beautiful, magnificent sculptures. 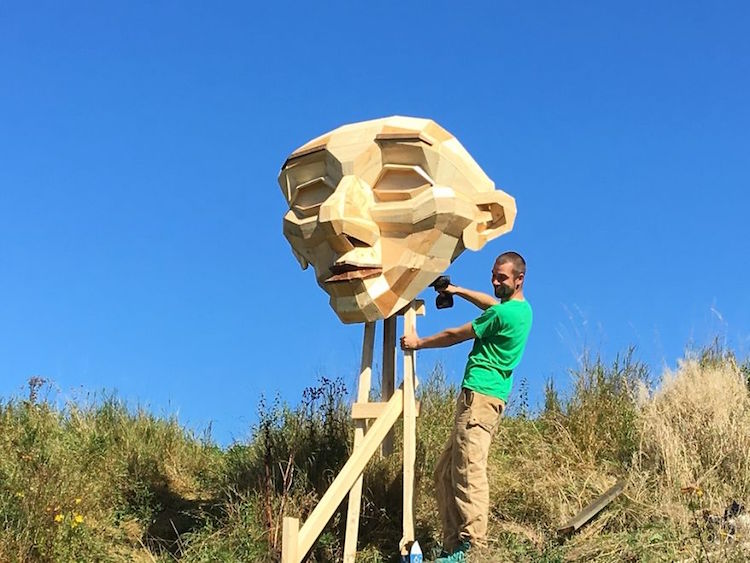 Thomas is inspiring people to recycle, that something amazing can be made out of things we throw away from small projects like making furniture to jaw-dropping giant statues. Thomas has made six huge wooden sculptures using pallets, sheds, and old fences and other garbage, but they are hidden in the woods of Copenhagen, in order to encourage people to walk and explore the beauty of nature. 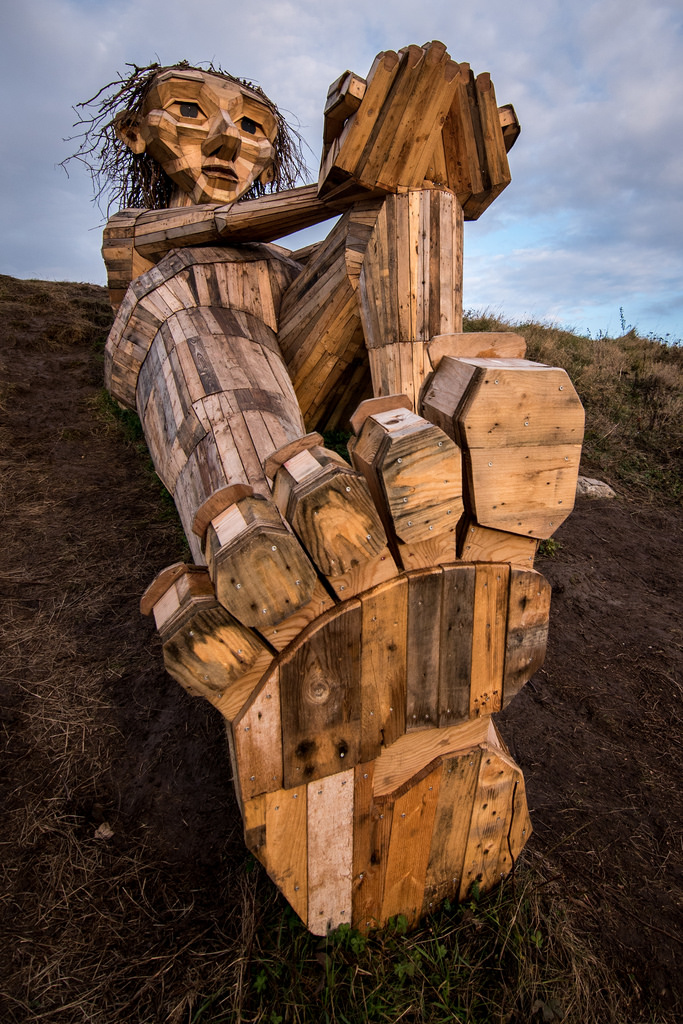 The hunt of 6 forgotten giants is like a treasure hunt only this time your treasure is nature. “All six sculptures are made from scrap wood with the help of local volunteers, and is the first chapter of Thomas Dambo’s ongoing story: “The great story of the little people and the giant trolls”. The project wants to bring art out of the museum, show the beautiful and often overlooked nature spots, and at the same time give an exciting and different experience,” reads the description of the hunt for giant trolls.

Here are the 6 giants who are hiding in the forest, just have a look. 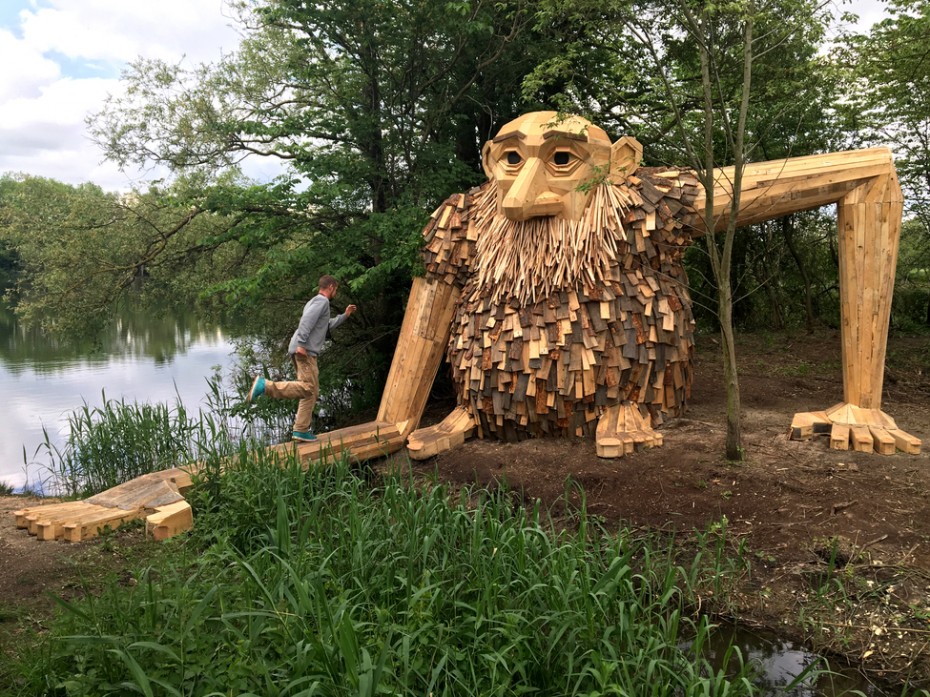 Teddy Friendly is one of the six giants residing in the Copenhagen woods it is made out of scrap wood and trash. Teddy is a recycled statue from Thomas, which sits by a water stream, with his hand stretched out, helping others cross the water body. Teddy was made with help from four local people and a teacher named Teddy who assisted him in setting the sculpture up. Thomas named the statue Teddy, as he put a lot of effort into making this. 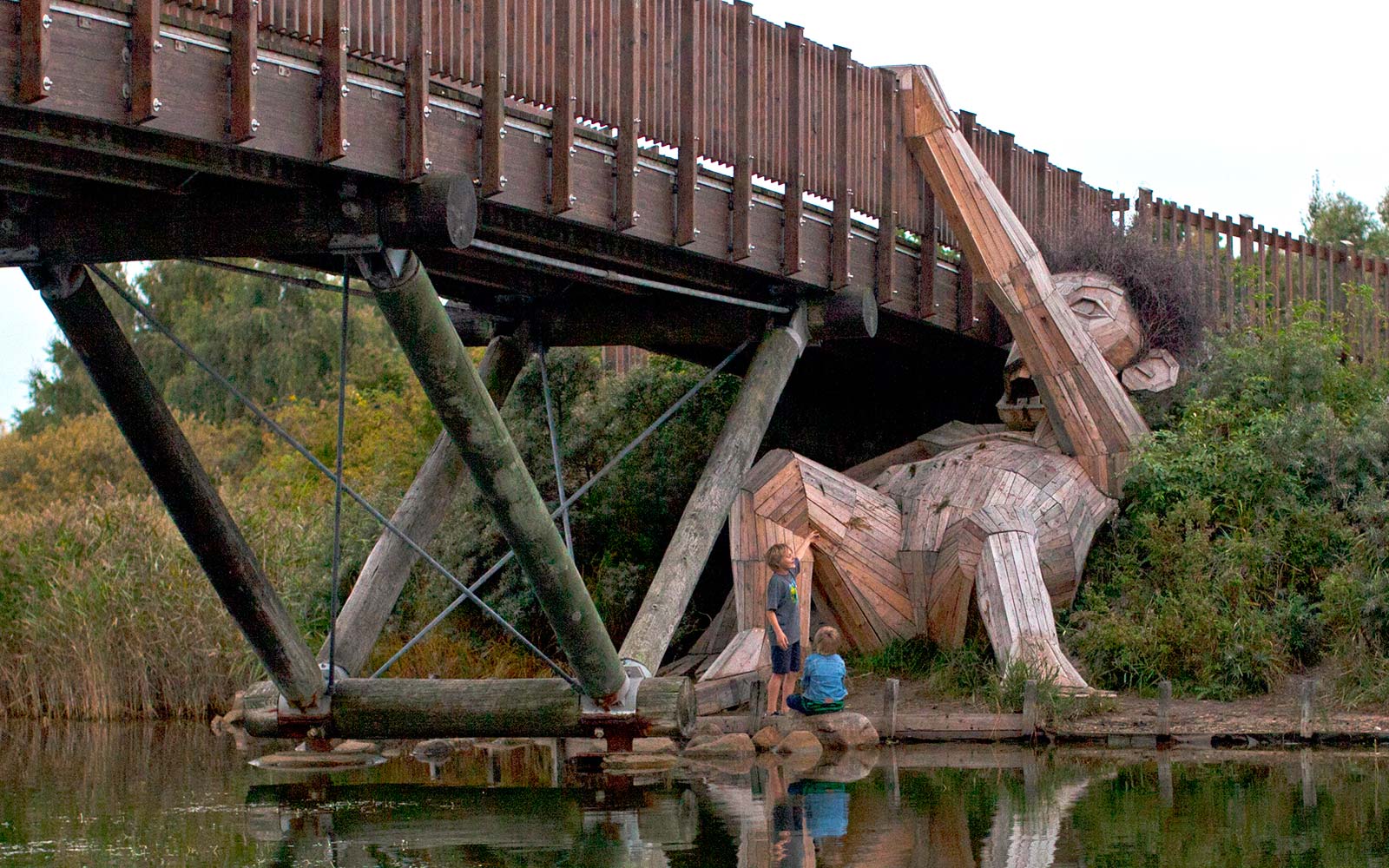 Oscar is another giant hiding in the forest. As he sits under one it’s called Oscar under the bridge. It is made out of scrap wood from a torn down watermill and broken pallets from local industries. This statue is made in a way that he appears as if he’s clinging from the bridge. It was also named as Oscar, as an artist from Chile called Oscar helped Thomas make the sculpture. 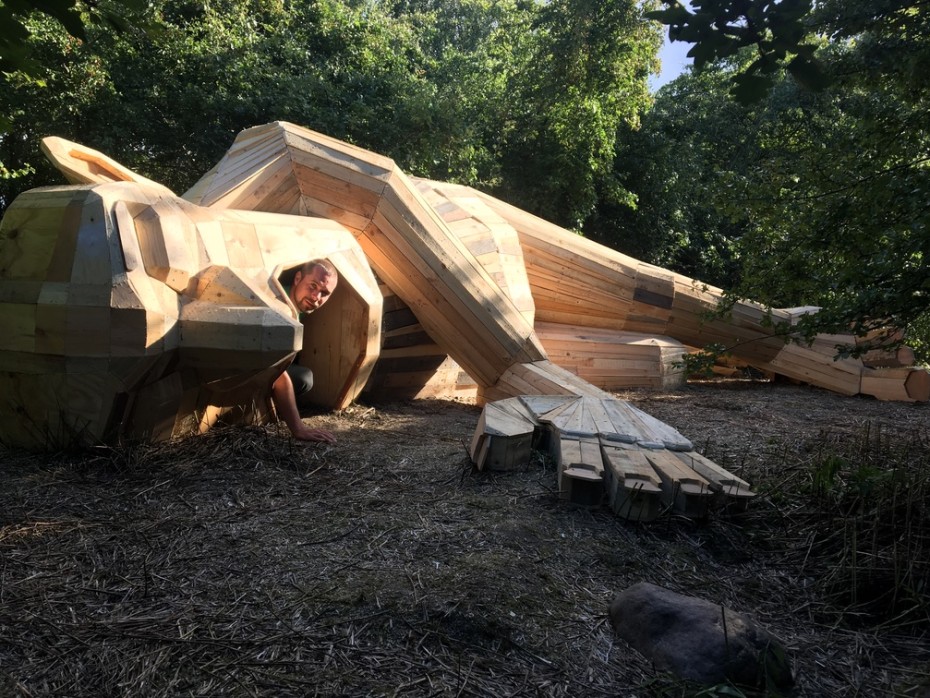 This one is far away from the hustle and bustle of the city. As it is lazy, it is sleeping on a hilltop. You can find Louis napping under a green blanket of nature in a secret place called Rødovre. If you want, you also sleep inside him, as there’s a crawl space in his mouth where kids usually hide and play. The sculpture is named Louis, Thomas’s old assistant who came to Copenhagen for a visit and decided to help Thomas out. 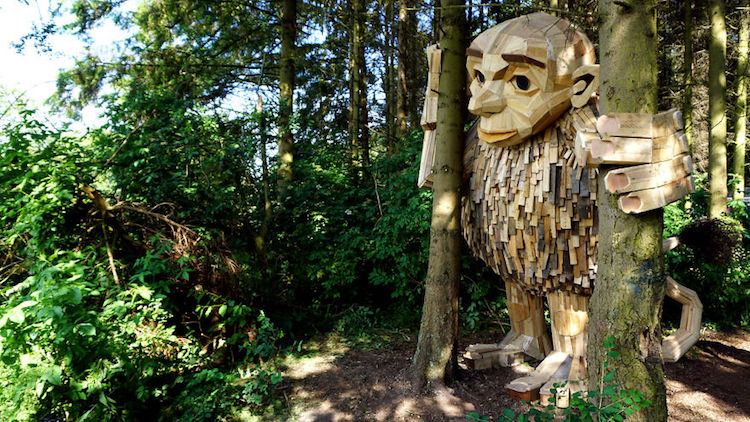 This sculpture is located in the area of Vallensbæk Mose. Tilde is one of the most loved hidden giants of Copenhagen woods. Tilde is made from scrap wood scavenged by Thomas and his team near a beautiful lake, peaking from behind the woods. Thomas has created 28 small birdhouses inside Tilde so that birds can find a home to live as that area is full of small animals and birds. 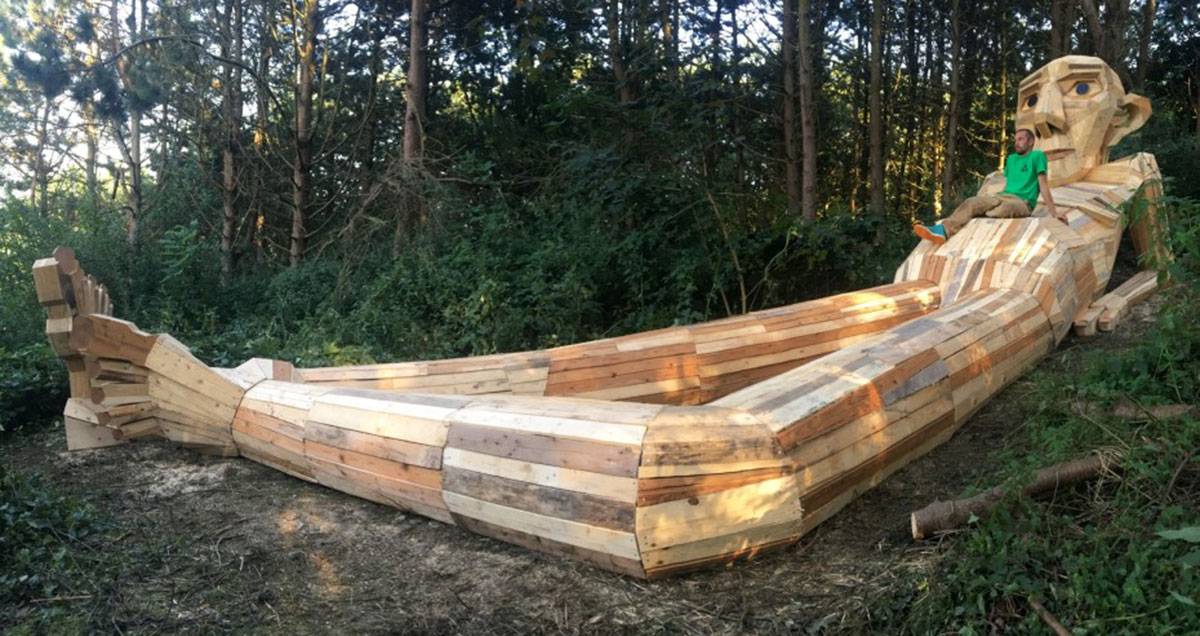 Thomas is the sculpture who is totally chilling and admiring the nature around him. He rests on a hilltop. As his legs are super long and kids usually sit and play on them, you can spot Thomas from a distance. Thomas on the mountain was named Thomas, who is behind Thomas, and his intern, who helped him create all of the six giant statues. 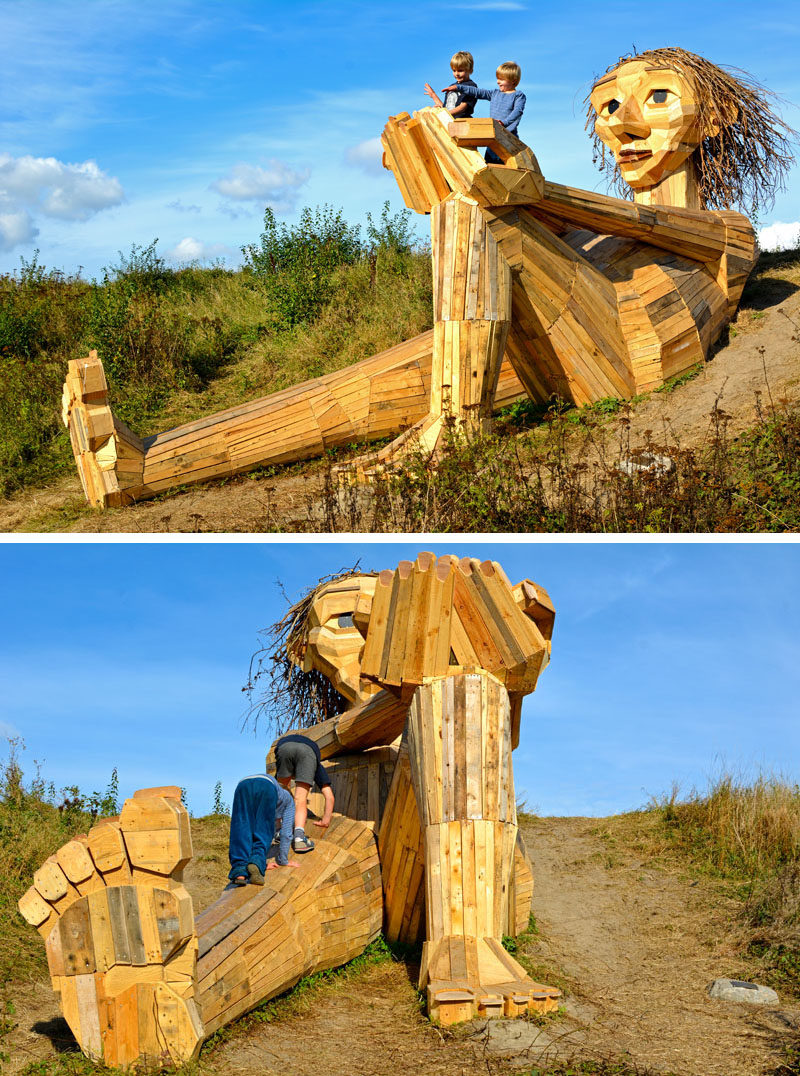 This statue is a beautiful lady sitting on Hvidovre, a little hill in Copenhagen. She has branches for hair and sits with her hands on her knee, where you can climb up to witness a gorgeous view from above. She is made up of pallets, scrap wood, and garbage. You can also have a stroll in the woods.