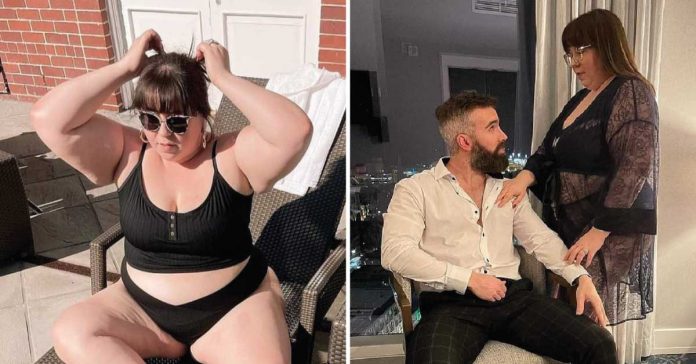 Unfortunately, in today’s society in which we live we see how many people feel they have the right and the power to make judgments about the life and appearance of other people, the negative that the indiscriminate use of mobile phones has left us is that “courage ” that apparently many have when criticizing behind a screen and under anonymity.

Today we see how women are attacked by people of the same gender simply for being plus size, for thinking differently, for being very thin, for being short, in short, for not having the figure of the celebrities that we are used to seeing. or simply because they lead a very different life from ours.

It is for this reason that Alicia Mccarvell , a plus size woman from Canada decided to share her story with the rest of the world and in some way or another generate a little awareness in society.

In an ideal scenario, people fall in love with their partner not because of their appearance, but because of their good intentions, their intellect, the connection they establish between them and thousands of other reasons. But unfortunately Alicia has not been able to live her marriage in this way, since she has been the object of ridicule and very strong criticism for her being plus size and having a muscular husband who takes great care of him and goes to the gym.

This couple has more than 15 years of a happy marriage.

“ Scott is the love of my life, without a doubt our marriage may not be perfect in the eyes of others but for us it works, we love each other, respect and validate each other’s feelings, I think that is the secret of our relationship. Beyond the physical, we are both deeply proud of how far we have come together.”

But everything cannot be perfect, despite the fact that this couple are immensely happy to have found each other, they must face daily criticism from hundreds of people who claim that Scott is not really in love with Alicia because she is plus size.

” This was one of the main reasons why I decided to promote the “body positive”, because every time I publish a photo or video with my husband, hundreds of netizens begin to mock and question our relationship.”

This has reached the point that many say that Scott is with Alicia for her money or that maybe he is still with her because when he met her she was a slim and slender woman. And there are even those who have been more offensive and claim that Scott “occupies” Alicia to hide her homosexuality.

Tired of so many criticisms, Alicia decided to publicly explain to all those who claim to know more about her life than they do, making it clear that she and Scott have a love relationship where the physical has no influence at all.

“ All these criticisms and attacks against me is because I am plus size, if a thin woman were next to Scott, no one would generate any judgment, what no one understands is that he values ​​my humor, my commitment, my love for him and my heart kind. None of these things that he values ​​about me would change if my body were different.”

Although this has not made her love life easier because she still receives constant criticism, she claims not to take these negative messages into account and continues to publish her photos and videos with her partner, living a happy marriage.

Do not forget to share this publication and leave us your comment for this woman who has been teased for the simple fact of being plus size and tell us if you think this couple should be teased so much simply because of their weight difference.