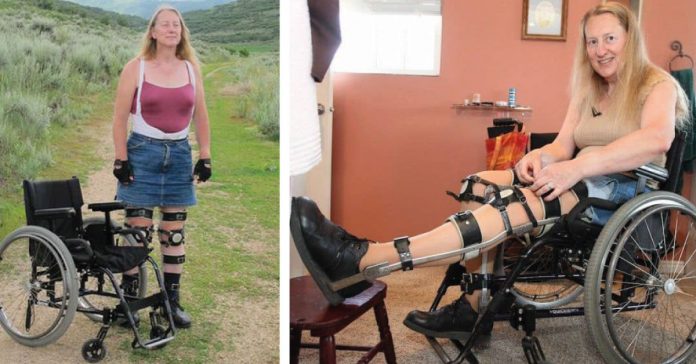 Chloe Jennings-White is 67 years old but says that as a child she wanted to be disabled, although she enjoyed and has always been in good health. There was a time when she wanted to have surgery to cut the nerves in her legs, but she decided against it because of the high cost, instead she uses a wheelchair to feel that her limbs don’t really work. .

Her life is quite normal, she is happily married, has a PhD in Chemistry and has several degrees from Cambridge and Stanford universities.

However, one of the things that had always been missing in her life was feeling and being disabled. According to the information provided by Huffpost , the woman could suffer from “Body Integrity Identity Disorder (BIID in English), a psychological condition where patients do not accept their members and want to amputate them or become paraplegics.

“When I’m in the wheelchair, I don’t even think about her. It’s normal for me, but every time I walk, I always keep in mind, sometimes dominating my mind, that this is not the way it’s supposed to be,” Chloe commented.

She says that since she was four years old, she feels that something bad happened when she was born, because her legs shouldn’t work. She even became jealous of the children who were disabled and of an aunt who wore braces on her legs due to a serious accident.

At the age of 9, she jumped off her bike from a stage but all she got was a couple of scrapes and bruises: “Doing any activity that gives me the chance of becoming a paraplegic gives me a sense of relief from the anxiety caused by the BIID”, he commented.

Jennings-White confessed that she will be really happy when she can be truly disabled. Surgery is still not an option, costing approximately $25,000.

“I can never afford it, but I know I won’t regret it if I ever can, and I don’t know why it bothers people. It is the same as a transsexual man having his genitals cut off. They will never return, but they know what they want, “he concluded.