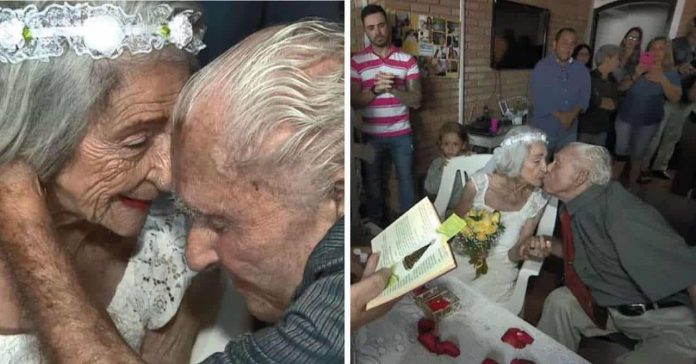 It is well said that there is no age for love and this couple is a living example.

Marcelino and Branca are a couple almost like any other that has just joined their lives in marriage. The peculiar thing about these lovers is that both already have more than 9 decades of life. Marcelino is 100 years old and Branca is 96 , but this was not an impediment for them to have a dream wedding.

According to G1 media , the widowers met at a retirement home in Campinas, Brazil, where both are residents. When Marcelino saw Branca, he no longer wanted to leave that house. Soon friendship arose between the two and little by little their relationship transformed until they decided to become boyfriends. After two years of romance, the couple wanted to get married. There was no impediment to take the next step because all that mattered to them was the love they felt.

Branca, who was dedicated to styling, has a great personality that made the boyfriend fall at her feet. Her room is decorated with stuffed animals and she is a born romantic. While Marcelino is a retired engineer, originally from Portugal, who received Brazilian citizenship thanks to his work in Campinas. He likewise is a hopeless romantic.

The lovebirds held their ceremony in the same house where they live. The space was turned into a ballroom, with beautiful decorations for the occasion and a cake with seniors like them. The event was extremely emotional and all the guests were very happy to witness the tender scene.

The couple’s children attended the wedding, who assure that Branca and Marcelino have a very pure and disinterested love.

The new boyfriends declared to G1 that they were very nervous about the marriage and both believed that the other was going to back down; however, none gave up. After celebrating Marcelino’s centenary, a date was set for the wedding and both of them showed up at the ceremony, very proud but above all, in love.

Branca and Marcelino do not stop giving each other constant signs of love. All their relatives witness how affectionate they are with each other and how much they love each other. Kisses and hugs are never lacking in their relationship.

»SHE LEAVES HER ROOM […] SHE GOES TO HER ROOM AND GOES TO TALK TO HIM, SAYS GOOD MORNING, AND KISSES HIM», MENTIONED MONIZE FARIA CECÍLIO, CARETAKER OF THE NURSING HOME AND WHO HAS ACCOMPANIED THE LOVEBIRDS THROUGHOUT THEIR RELATIONSHIP.

For her part, Andreia García Jagucheski, owner of the house, assures that the romance between Branca and Marcelino had positive effects on the rest of the inhabitants. It is like an example that being in a nursing home is not the end, but rather the beginning of great and wonderful stories, like the one about these lovebirds.

Despite their advanced age, both Marcelino and Branca feel younger, and of course, happier. Every day they show that for true love there are not enough limits.