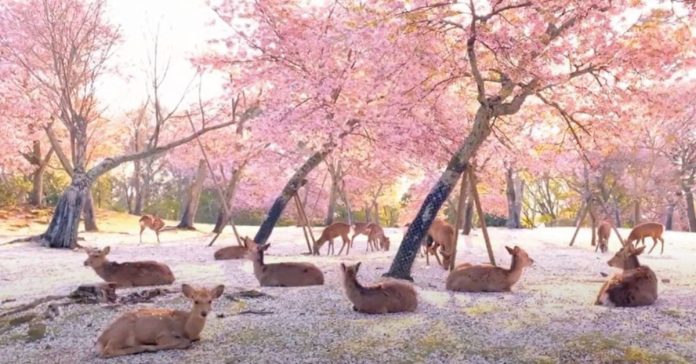 In spring and autumn this place becomes one of the most beautiful in the world. Nara Park in Japan has everything from cherry blossoms to deer roaming free.

In 1880, at the foot of Mount Wakakusa, the Nara Park was created, which is located right in that town. This park is designated as one of the “scenic beauty spots” by the Ministry of Education, Culture, Sports, Science and Technology of Japan. It is home to more than 1,200 sika deer in the wild, which can roam freely on the park grounds, as it is classified as a “Natural Monument”.

According to local tradition and folklore, sika deer are sacred animals. According to a legend, one of the four gods of the Kasuga Shrine appeared on Mount Mikasa-yama riding a white deer. Since then they are considered divine and sacred beings of local temples. However, after World War II, the deer were stripped of their divine status but were named national treasures.

Today, visitors can buy Shika-senbei, or kibbles to feed the park’s deer. These cookies are controlled and sold exclusively by the company Wnow.

During the spring, thousands of cherry trees bloom, starting Hanabi, which is celebrated by both locals and tourists. Hundreds of people gather to take photos of the cherry blossoms and enjoy the beautiful view, both of the trees and of the deer that inhabit and coexist with the visitors.

In autumn, the trees turn ocher, orange and reddish colors in their leaves, creating a visual spectacle that rivals that of spring.

At the end of March and beginning of April, sakura trees are in bloom all over the country and there are currently more than 30,000 cherry trees, offering an amazing sight. The first cherry trees are believed to have been planted on the mountain more than 1,300 years ago.

From the Nara park you can go to Kyoto, the capital of Japan or also to Osaka, which is characterized by having a more relaxed and joyful environment than Tokyo or Kyoto.

In the same way you can visit Yoshino, one of the nearby cities of Nara that is also known for being an ideal point to appreciate the sakura bloom. Mount Yoshino has more than 30,000 trees on its slopes. The city sits on top of the mountain and is full of temples, restaurants, inns, and viewpoints.