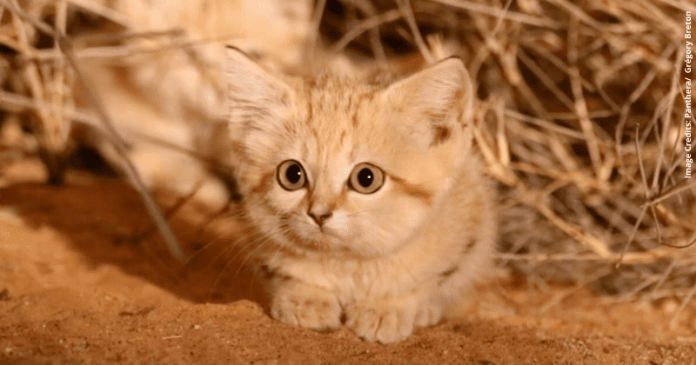 Some stunning photos of three wild sand kittens playing in the wild were captured by researchers from France.

Recently, there’s news where wild sand kittens were caught on camera for the first time. Once you look at them you’ll be surely surprising as they are the most adorable kittens in the world.

Researchers from the wild cat conservation group Panthera France found and photographed three sand cat kittens in Morocco reported The Independent. They spent four years in research and they had an excellent results from it. Wild sand cats are known for their elusive nature. They have been documented in their African range for the first time in known history.

Panthera researcher Grégory Breton and his fellow researcher Alexander Sliwa set out into an undisclosed area of the Moroccan Sahara and started looking for the rare cats inside the bushes. They found the sight of three pairs of eyes reflecting back at them from under a bush at 2 a.m. after toiling and searching for hours.

Those eyes belonged to three sand kittens that had been kept there by their mother, who most likely went out to hunt in the night. The team estimated the kittens were between six and eight weeks old after their initial research. The researchers photographed and videotaped them for an hour as sand cats are such a rare sight. In order to record some of their natural behaviors they installed camera traps too.

Later on, they saw an adult female sand cat, likely the kittens’ mother. The team radio-collared her in order to keep a track of her, this will only help researchers to gather data regarding this scant Moroccon species. These cats can be found living in the Sahara, the Arabian Peninsula, and parts of central Asia. They are known for being stealthy and they come out of their burrows at night.

Their buttered-colored coat are perfect for camouflage, their footpads render their tracks nearly invisible in the sand. Sand cats are also observed crouching down and closing their eyes when they see any kind of light being shined on them. Their stealthy habits also make conservation difficult while all these factors have helped them to survive in a harsh climate.

Grégory Breton said in an interview with Bored Panda, “Finding these kittens was astonishing. We believe this was the first time researchers ever documented wild sand cat kittens in their African range.” Sand cats are the only species that live exclusively in deserts. But the sad news is that you cannot keep them as pets.