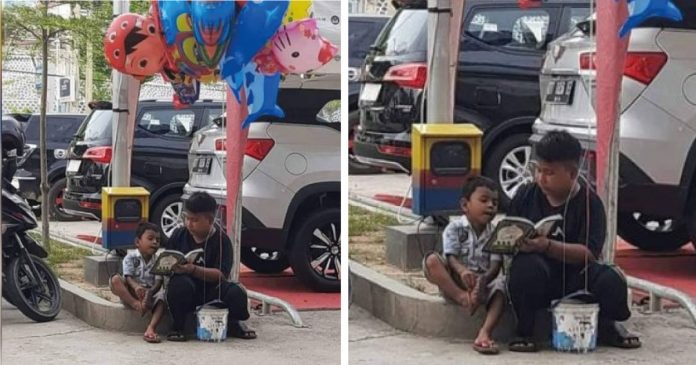 These humble brothers from Indonesia have valued the few resources they have and have taken advantage of it. The oldest is in charge of selling balloons and masks in the street, while at the same time he cares for and teaches his little brother to read with a Koran (a book of the Muslim religion that contains the revelations that God made to Muhammad).

The moment where both children are seen sitting on the sidewalk of a parking lot, the older one holds the book and teaches the little one, while on one side there is a bucket with the products that he sells, was captured by cameraman Andi Rihpan Ramadan. Andi realized that there was no adult supervising the children , and according to people close to the place, both have been selling their products for several months in order to survive.

The image went viral shortly after, where many users were worried about the pair of little brothers, many asking for the parents and others asking for the exact location to help them. The cameraman decided to share what little information he had: For those who ask where this boy sells, he meets his younger brother every day in front of the Top Swalayan supermarket in Kolaka Regency, southeast Sulawesi .

Of course the children were abandoned or lost their parents, let’s continue to spread the story and reach good-hearted people who can help them.