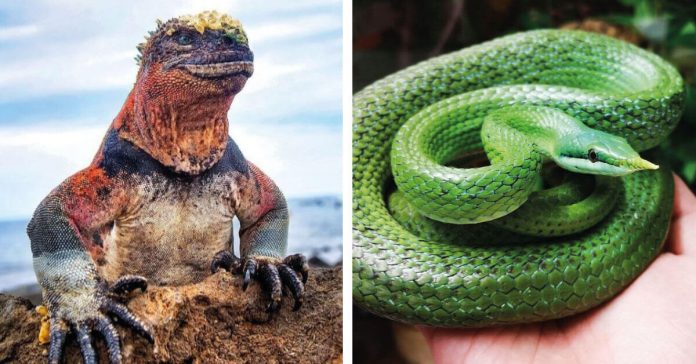 The world is full of thousands of amazing creatures, many of which come from our imagination. Every year specialists discover new animals, either completely new, previously extinct or even with strange mutations. However, not only the new species can surprise you. Also the existing ones can get you out one or another scare.

The earth is full of amazing creatures, the existence of which is really hard to believe. Reptiles are no exception. Some of them are so unusual that when users see their photos on the Internet, they can’t believe their eyes.

The name makes it clear that it is a poisonous and potentially dangerous species. Despite this, they are quite shy and prefer to avoid encounters with potential enemies.

02. The Komodo dragon, one of the largest lizards in the world

03. Blue Abronia, one of the rarest lizards in the world

King cobras grow throughout their lives. Therefore, it is not surprising that super-large individuals are found in nature, reaching four meters in length.

06. Basilisk – a lizard that can run on water

These snakes are famous for their aggressive nature and innate ability to raid bird nests. The absence of teeth and the special structure of the vertebrae allow them to easily swallow large eggs.

They call it that because of its peculiar nose that is not really a nose. These are just scales that have changed in the process of evolution and have taken such an ext

An unusual nocturnal reptile distinguished from the rest by the presence of several rows of strange, widely spaced scales

It is one of the largest freshwater turtles. Their weight can reach from 8.5 to 60 kilograms. It has a rather aggressive character, so once again it is better not to disturb the animal and not to appear on its path.

These turtles are characterized by their lack of a shell. Its back is covered with smooth skin or rare spines.

Despite their frightening appearance, pythons do not have venomous bites. It is common to see these types of snakes as pets and with huge terrariums just for them.

At first glance it looks like one of the varieties of snakes. However, it differs from snakes by its movable eyelids, a special shoulder girdle, and a completely different jaw structure.

They are a great example of the adaptation of living beings to their environmental conditions. During their evolution they learned to swim underwater, like crocodiles. They also got sharper teeth to bite down on their food more easily.

It is one of the most colorful reptiles on the planet. Her skin is so unusual that she was nicknamed Spider-Man.