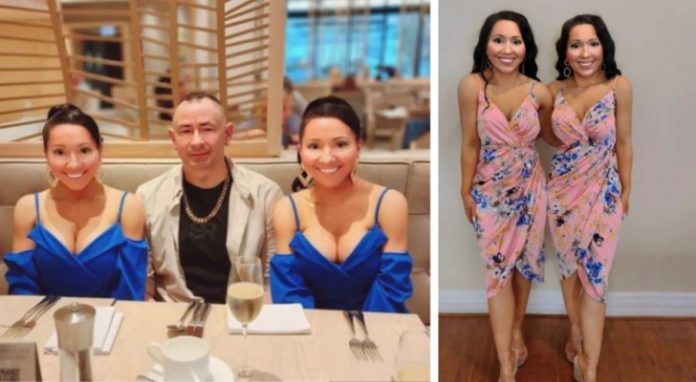 Siblings have a special bond, it seems that one look is enough for them to understand each other. This ability is even more visible in twins. The latter share every moment of their existence, they seem to have a great connection, they almost seem to be able to engage in telepathic communication. One thinks a thing and the other says it.

All this is visible in these two twins, who not only are identical in every way, but have decided to share everything. So much so that the two women fell in love and even got engaged to the same man . A complex situation, let’s see how they chose to solve it.

Anna and Lucy DeCinque have been described as the most identical twins in the world. Not only are they indistinguishable, but they seem to share every exterior and interior detail, there is no difference. The most striking aspect is that they live in a sort of symbiosis . Anna does nothing if Lucy doesn’t follow her and vice versa. Very often, they behave as if they were one person.

“When one goes to the bathroom, the other goes with her, the same goes for the shower. One calls and the other answers immediately. I don’t think we would operate alone. We would never want to separate. We are bound together forever.”

Their bond might not be understood, they explain that they cannot live apart, they need to constantly know what the other is doing.

“We shower together, we do makeup together, we go to bed at the same time and the same thing happens when we are hungry, everything is the same, we eat the same amount of food. Others might not understand, but this is how we want to live our life, we see ourselves as one person”.

The similarities don’t end there, they both fell in love with the same man, and he’s now their boyfriend. His name is Ben, it seems that he proposed to them both, but the marriage has not yet taken place because in Australia, where they live, it is forbidden.

“Ben understands our bond and doesn’t judge us. It’s been that way since day one. There’s never been any jealousy. That way we get to be together all the time.”

What do you think of this situation?