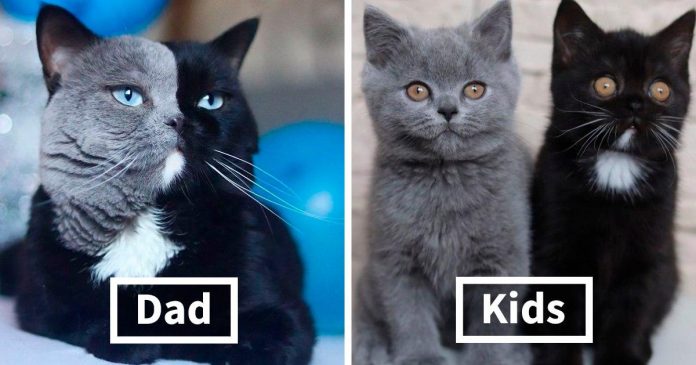 The daddy cat, Narnia, is with a remarkably rare genetic trait. He has a unique perfectly split facial pattern which makes him a truly stunning specimen.

The cat has two different colors on his face perfectly split down the middle. It’s almost as if architects designed him to have an exact 50/50 split in coloring, looking at the quirky cat’s face. It seems it’s down to pure luck. He’s not a chimera cat, leaving his owner and geneticists stumped.

Chimera cats have two despite only having one DNA. Narnia has two kittens, a grey kitten named Phoenix matching the right side of his face and a black one called Prada, matching his left side. Narnia has a small white spot beneath his mouth that even Prada inherited.

Even though the adorable kittens got their father’s coloring, they don’t have Narnia’s beautiful blue eyes.

“A geneticist performed tests and [found] Narnia has only one DNA… there remains a mystery for science. He also has beautiful blue eyes, which is very rare in a cat that is all black. Normally blue eyes are often found in white cats.” – Stephanie said. “When Narnia was born I was extremely surprised. I knew immediately that he was exceptional. He was born with a double black and grey face, which is very rare – normally a cat cannot be black and grey.”

Stephane said, speaking of how Narnia is handling the dad’s title: “Narnia is very well and he loves playing with his kittens.”

The other kittens have inherited Narnia’s striking blue eyes, unlike Prada and Phoenix. Stephanie said, “It is very rare, there are only a few cats in the world that are fully colored and have blue eyes. This is a new gene called “ice.”

According to Stephanie Narnia will soon be a dad again and his kittens should be born around June 29.

He Became A Dad To These Two Cutie Pies In Each Color Recently,

It’s not the first time and the last that Narnia has been a parent. Stephanie is a professional cat breeder and she added that he has already been a father several times, and all his kittens are of different color variations.

Good Looks Are Surely In The Genes Seeing Their Mom And Dad,

Seeing Their Mom And Dad, Good Looks Are Surely In The Genes

MPs have now said that lonely people in Britain should be prescribed a cat to keep them company.

There will be lots of equally adorable moggies looking for homes elsewhere while Prada and Phoenix have gone on to find their forever homes.