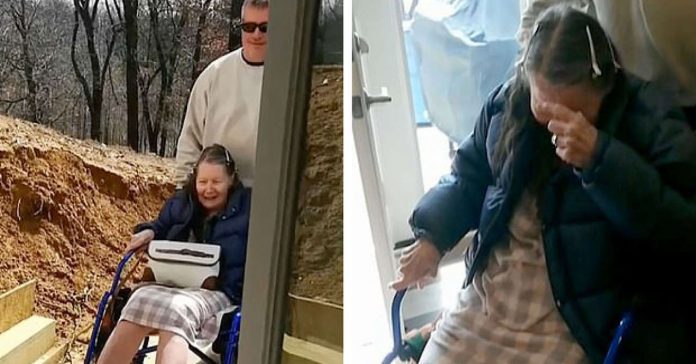 Parents take care of their children, give them love, education and strive to give them everything they need. Our parents are truly capable of going to great lengths to ensure our well-being; however, sometimes we realize this only when we grow up.

And since time passes the same for everyone, while we become adults, they age and now it’s our turn to see to their well-being.

In some cultures, one of the children is expected to take care of their parents when they are old. Whether it’s the oldest, the youngest, the one not yet married, etc., it all depends on the culture and family dynamics. But there are also societies that prefer that the elderly live in a residence where there are people trained to care for them.

Schon Miller, a resident of Ohio, United States, refused to send his parents to a nursing home.

In 2019, Miller noticed his parents’ need for special care, but he didn’t want them to live in a nursing home. He then had the fabulous idea to remodel his basement and turn it into a small apartment for his parents. Him so he could be close to them and take care of them.

The man made every effort because he wanted his parents to feel very comfortable. And he achieved his goal because when he introduced them to their new home, his mother couldn’t help but shed tears of joy.

According to  the Daily Mail , Bonnie and George Miller lived alone but as time went on it became more difficult to stay that way. Everything got complicated when Bonnie fell and broke her shoulder.

Given this fact, his son Schon worried that his parents could no longer live alone, but he did not want them to be in a nursing home either. It is then that he and his wife Jeannie decided to convert their basement into a special room for the 87-year-old couple to live comfortably there.

However, Shon and Jeannie’s first choice was not that as they were looking for a house near their home where their parents could live. Unfortunately they couldn’t find anything and so they came up with the idea of ​​transforming their own house.

“WHEN MOM BROKE HER SHOULDER IN A FALL, WE STARTED LOOKING FOR A HOUSE THAT ALREADY HAD A MOTHER-IN-LAW SUITE FINISHED. BUT WHEN WE COULDN’T FIND ANYTHING, WE DECIDED TO CUT A HOLE IN THE BASEMENT WALL, GET RID OF OUR FUN STUFF LIKE THE POOL TABLE, INSTRUMENTS AND KARAOKE AREA AND MOVE OUT SO WE COULD TAKE CARE OF THEM,” SCHON SAID.

He and his wife made some sacrifices in order to remodel the basement into a “five-star suite.” His intention was to be able to keep an eye on George and Bonnie, help them with the housework and, of course, spend pleasant moments with the family.

Schon informed his parents of the new home as an early Mother’s Day gift for Bonnie. The emotional moment was captured on video , where you can see the 87-year-old woman crying with happiness at the tender gesture of her son and her daughter-in-law.

Bonnie Miller, who is in a wheelchair, is led through the bright and newly decorated room of Bremen, Ohio. As she progresses you can see the emotion on her face and her eyes filling with tears. The woman was very grateful to Schon and Jeannie for giving her a new space to live. Oh guys. We love you,” Bonnie said.

Without a doubt, the son had a wonderful gesture towards his parents, who will undoubtedly have an incredible time in their new home and with their son who has shown them how much he loves and cares about them.

“Neither can live without the other and we didn’t want either of us to end up in a nursing home,” Schon said.