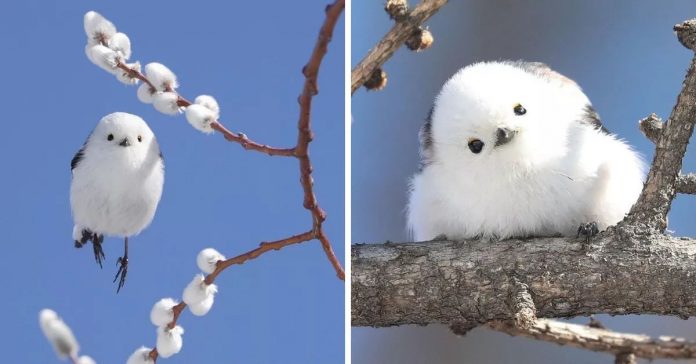 Tiny is king and small is best in the world of cute things. Tininess is a very important element of being truly small and there is an emotional element too.

“And call him George.”

The small category definitely consists of tiny birds and I stumbled across a particularly small bird that you would surely appreciate.

This little cotton ball is called a Long-Tailed Tit.

Long-tailed tits can be found in Europe and Asia. They have long tails in relation to their tiny bodies. An adult only grows to be about 13-15 cm (5-6 in) long, and from that, the tail counts for as much as half that length.

The specific group of long-tailed tits found in Hokkaido is in a league all their own. And it’s true that heir tininess is always adorable.

Hokkaido is the second largest island in Japan. It contains of lot of wildlife areas, such as six national parks and 17 quasi-national and prefectural parks.

Hokkaido has also become famous for its wildlife diversity and there are many species that can only be found there.

Many animals in Hokkaido have unique features.

Most long-tailed tits have brown or gray “eyebrows.” They have more brown in their feathers and the ones in Hokkaido have pure white faces.

So, they are like flying cotton balls, with black tails and wings.

They have earned their own name: the shima-enaga bird.

This is called as “long-tailed island” bird, which is most accurate.

These birds are very popular among Japanese people.

This is a bird themed dessert.

Lots of little knick-knacks and treats themed this bird can be found around these small birds.