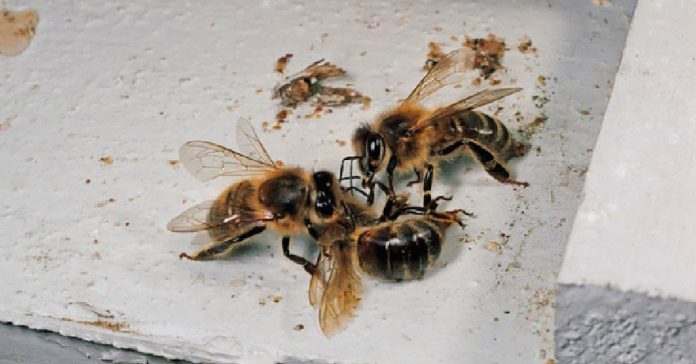 In a trend of bringing “sustainable” products to supermarkets, seeking to bring alternatives to dairy foods for 5 years. In the United States alone, the consumption of almond milk has increased by 250% in recent years, which has brought an economic spill of 1.2 billion dollars a year. But this lucrative franchise has a dark side, where bees are the most affected.

Actually, almond milk is not “milk” as such, but a simple drink, since it comes from the Prunus Dulcis tree, which is grown in various regions of the world. However, in the Valley of California are the most powerful production centers on the planet.

It is estimated that 80% of the world’s production comes from this valley and this is where the tragedy happens: The local bees literally die of exhaustion, since they are essential in the production chain, as they are responsible for pollinating the almond trees, according to a recent report in The Guardian.

As a result of the trade in this milk, 50 billion bees lost their lives in the winter of 2020 alone due to the irresponsible use of agricultural pesticides, which weaken bees to the point of death. The exploitation of this industry puts this species in extreme danger, which is in danger of extinction.

As if that were not enough, exhaustion does not only come from intoxication, but also from the daily coverage they do. Bees need to rest in winter and almond production spaces do not consider this space in their annual agenda, affecting their biorhythm, health and well-being in general.

Let’s take into account that the agri-food sector depends largely, if not almost entirely, on bees and these irresponsible and unethical practices in the United States sacrifice the lives of billions of copies a year.

Regarding the situation, the Almond Board of California highlighted that the causes of death can be much broader:

“WE ARE ACTIVELY COLLABORATING WITH BEEKEEPERS TO UNDERSTAND WHAT ARE THE MAIN CAUSES OF EXTERMINATION: VARROA MITES, PARASITES AND DISEASES IN GENERAL, EXPOSURE TO PESTICIDES, LACK OF FORAGE AND NUTRITION, INSUFFICIENT GENETIC DIVERSITY…”.

Under the name of Honey Bee Best Management Practices (BMP) , they aim to make “almond plantations a safe and welcoming place for bees”. Despite this, there is still a long way to go in this field.