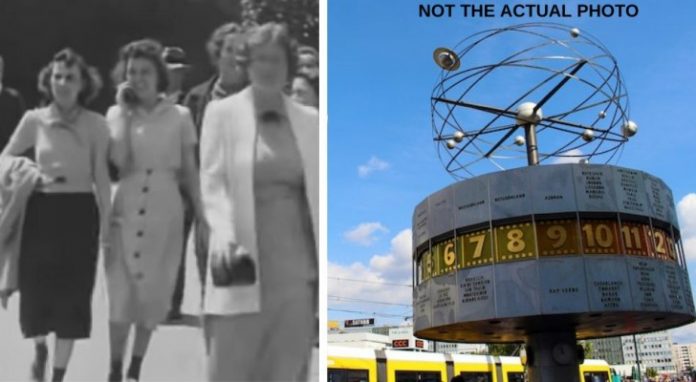 Time travel is a theme that has accompanied humanity perhaps since time immemorial; who has never thought how nice it would be to be able to return to a certain historical era, of which one is a passionate admirer? Or maybe you dreamed of being able to see what a more or less distant future would look like? Some just wish they could go back in time to fix something that went wrong in their life. In short, we have always been attracted by this possibility and many myths, like that of the magician Merlin, or novels like The Machine to explore the time of Wells testify to it. Not to mention the many films: just think of the famous Back to the Future or Deja Vu.

But will time travel ever be possible? Some say yes, thus opening the debate and presenting evidence.

Video from 1938 shows people walking towards the camera from a gate. Among them, a woman has a hand near her ear, which she lowers just before the film ends and appears to be holding a hand-sized black object, like modern smartphones . Many claimed the woman was clearly in conversation via a cellphone, while just as many critics cried hoax, claiming the video was nothing more than a photoshopped image made recently. Some say the woman’s hand isn’t holding anything and the apparent presence of a cell phone is just an optical illusion.

But the mystery seems destined to deepen, especially after Youtuber PlanetCheck said in a commentary on the video that the woman in question is her great-grandmother who actually uses a cellphone.

According to the user’s comment, his great-grandmother worked for industrial giant Dupont at its factory in Leominster, Massachusetts. “Dupont had a telephone communications section in the factory, they were experimenting with cordless phones,” the user wrote. “My great-grandmother Gertrude is talking to one of the scientists holding another cordless phone which is to her right as she walks.” It is not the first time that we have heard of the presence of mobile phones in scenes from the past: smartphones and other modern technological tools have also been seen in older works, for example in a painting of the 17th century or even in hieroglyphics.

In reality, this is yet another story with many inconsistencies, first of all the impossibility of establishing that the woman is really holding an object. Also, is it possible that no one around the woman finds it odd that she is talking to herself or holding such an unusual object? Last but not least, why would a large industry have such an important technology tested by a simple worker?

To the readers the final (not so) arduous judgment.