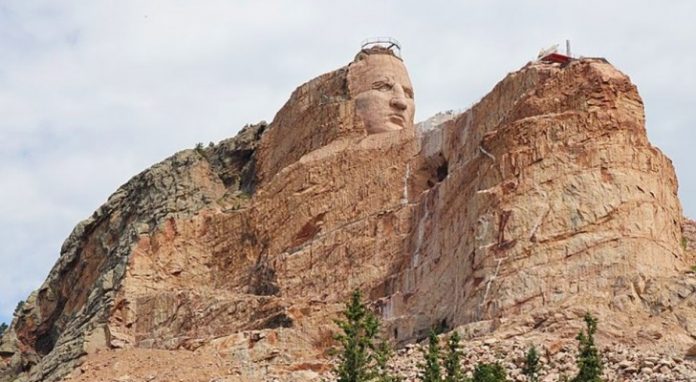 Not everyone knows that in the Black Hills of South Dakota , one of the largest sculptures in the world is under construction. This monument is erected not far from Mount Rushmore, where the faces of four American presidents have been carved. For more than seventy years, workers have worked on the Crazy Horse Memorial , on the sacred land of the Lakota tribe. It is a huge tribute to Native Americans, and in particular to one of the wisest Indian chiefs: Crazy Horse. Although this work by the chief of the Oglala Lakota tribe is still far from complete, it is already impressive.

The history of the Crazy Horse monument began in the 1930s at the request of a Lakota chief, Henry Standing Bear. A story that mingles with that of the social redemption of the Amerindians who were wiped out by the occupation of settlers from European lands.

In 1930, work on Mount Rushmore was still in progress and Henry Standing Bear felt it was unfair that his people did not have a monument to celebrate its importance. That’s why he tried to contact the sculptor of Mount Rushmore, Gutzon Borglum, but without success. Stubborn, he did not stop at this refusal. In 1939 he began a correspondence with the Polish-American sculptor Korczak Ziolkowski . Ziolkowski had worked on Mount Rushmore under Borglum for a short time and seemed immediately interested in completing this huge project.

In order to get a suitable mountain from the government, Indian Chief Henry Standing Bear surrendered all of his land, 900 acres in total, so the project could begin.

The work immediately proved to be a political as well as an artistic affair . The sculptor – who began working in 1948 – stubbornly refused any public funding in order to be able to work without government constraints. This meant, of course, working with a small staff and modest means. Ziolkowski started working alone, without electricity, with very little water and on dirt roads . To understand the difficulties he encountered, a wooden ladder of 741 steps was used to reach the top.

The original drawing shows Crazy Horse riding his steed and pointing to the land where many Native Americans are buried . The sculptor was convinced that he could complete the work in thirty years, but he was wrong. Ziolkowski personally worked on the granite materials used to create this project before he died in 1982 at the age of 74.

At that time, widow Ruth Ziolkowski took over the project with her seven children. Ms. Ziolkowski arranged for the work to focus on sculpting Crazy Horse’s face rather than the horse, as her sculptor husband had envisioned. This means that today we already have an impressive view of the sculpture – although partial – which allowed a first influx of tourists. This made it possible to maintain the initial financial plan, which excludes public funding for this huge project. An ambitious sculpture in its conception and still amazing today which – after 70 years – is still in an embryonic state.