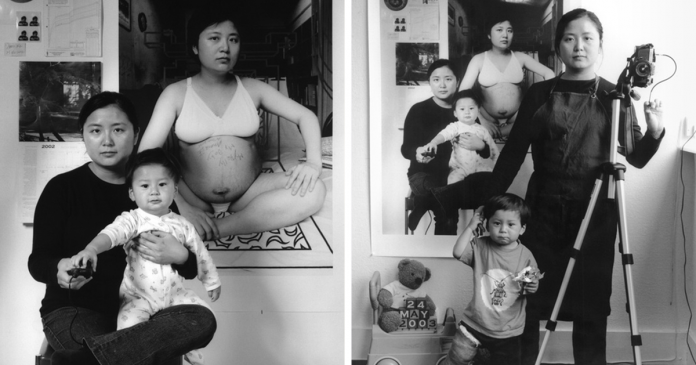 An internationally acclaimed photographer from Taipei City, Taiwan, Annie Wang started a photo series titled ‘The Mother As A Creator’ back in 2001, before her son was born. She documents her child growing up for 17 years in the series,.

The artist said in an interview with Bored Panda, “In the world of mothers where everything is hidden, the best way to speak out is through the strategy of self-representation, to express various parts of the self. I, as a woman and a mother, have tried to actively create my own self, instead of being passively interpreted by a male artist, as is traditional.”

According to the photographer being a mother shouldn’t be only about being selfless and sacrificing yourself. “The Mother is like an artist doing her work while calling upon her own wisdom. The Mother not only creates a life but also creates continually a continuous and fluid matrix of experience between Mother and Child.”

The photographer wants to show how becoming a mother changes her with ‘The Mother As A Creator’. Annie takes a picture of her and her son each year and poses in front of that picture the next year. She explained, “Therefore, different layers of my son and I emerge on the same surface after a lengthy accumulation of detail and texture. Different stages of my son and I are overlaid, and from the different pictures, we have created a dialogue with each other in this dimension upon compressed dimension. From within these dimensions will emerge a new depiction/visualization of Motherhood.”

Here are the amazing pictures in the gallery below!

2002 – Pressing the camera shutter together