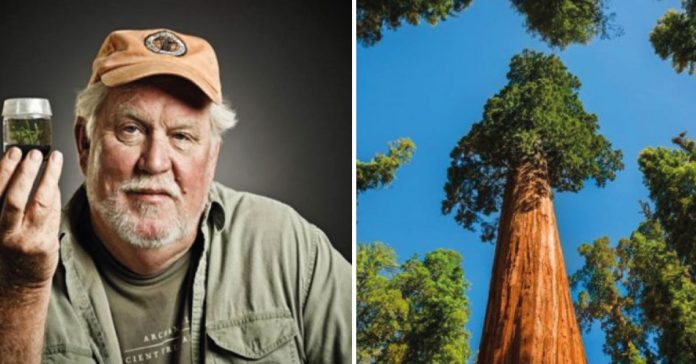 Every year millions of hectares of forests perish due to fires, in addition to animals, trees suffer the consequences of fire. Resulting in thousands of species of flora or fauna in danger of extinction.

Can you imagine a world without forests? Nowadays, that is a question that no one should ask themselves, however, it is a fact that has the potential to become a reality.

David Milchard undertook an extremely ambitious initiative, he focused on reforesting thanks to genetics, basically replicating some characteristics of various species to multiply them.

The project is a joint and family effort, one of its priorities was to clone Redwood or sequoia trees (considered the largest in the world), a species that can live for thousands of years and can reach 100 meters in height. and the 8 wide .

These types of trees are in the national parks of California, United States and many years ago they abounded, there is photographic evidence of miners posing next to them that shows their immensity.

The gold rush in the last century, the exploitation of resources and global warming have been to blame for the decline of redwoods.

Witnessing the crisis facing the forests, David Milchard began creating clones of Redwood trees in 1994 . To achieve this, they choose Sequoia heels and raise them for two and a half years. After this, they plant them in the Presidio forest refuge, located in San Francisco, United States.

His initiative seeks to save, protect and care for the earth’s trees, in addition to the benefits of preserving these huge trees are more than you can imagine, for example, they can store more carbon and produce more oxygen.

With over 40 years of reforestation experience, Milchard feels confident in making a positive impact with his project and now foundation Archangel Ancient Tree Archive.

The goal is to propagate, collect and replant redwoods , as well as wanting more diversity in the forests and a chance for something like that to spread to other parts of the world.

Its mission is divided into three important points : to propagate old trees before they become extinct; archive the genetics of these in living libraries for future generations and reforest the Earth with the offspring of ancient tree samples.

The Milchard family is the main person in charge of the foundation but they also have the support of other collaborators.