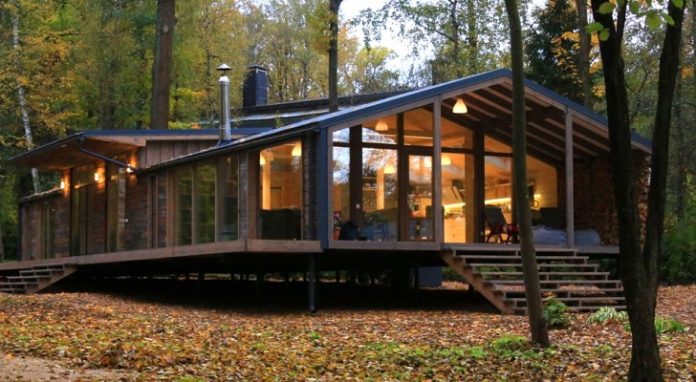 Looking at this magnificent cabin located in the woods of Russia, precisely in Kazan, we are not surprised that it has won the front pages of the magazines of the sector, and that it has caused for the manufacturer an increase in orders since the whole world.

The chalet was designed by Moscow-based Bio Architects and consists of several prefabricated modules for a total area of ​​approximately 360 square meters . But in addition to its impeccable rendering, it is the cost and speed of construction that amaze us.

The structure is one of the achievements of DublDorm , a line of prefabricated houses with a modern design that stands out for its speed of construction and low price.

The line offers homes ranging from a minimum of 85 square meters to a maximum of 430 square meters , with a cost varying between 23 thousand and 100 thousand dollars. The price of the house depends on the construction materials (metal, wood and glass) and the type of assembly (standard prefabricated modules). All the features that allow you to speed up the transport and assembly time, reaching a dozen days.

As you can see, the structures are designed to ensure maximum brightness . In this particular case, given the lack of a real neighborhood, the number of skylights is such that it appears to be between the trees.

We let you admire the magnificent photo gallery, certain that it will make you dream…