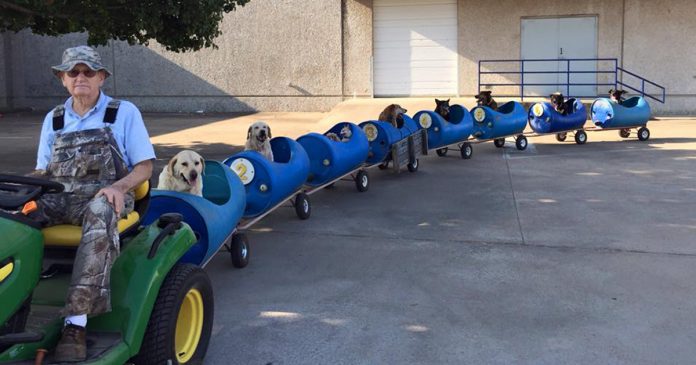 Eugene Bostick, an 80-year-old man lives with his family on a 3-acre land in East Fort Worth, Texas. His home is on a dead-end street with a horse barn and ever since they lived there. People have dumped dogs in their land and have left strays there to starve or die.

They take care of many animals and several stray dogs. Bostick and his family spent their time looking after the animals in their land after his retirement. They feed the animals, take care of them, and take them to vet trips every day. Bostick built a dog train to bring his pet friends out on adventures.

Bostick is very energetic even in his 80s. He needed a vehicle to carry them on to go on trips as he had so many dogs to take care of. He saw a guy driving a tractor with carts filled with rocks attached to it. The tractor inspired him to use the same concept for the dog trainer. Then he took plastic barrels, cut them, put wheels underneath, and tied them together. It wasn’t hard for him to bring his idea to life and the dogs love to read on the dog train since he is a skilled welder.

They get quiet and look around for the entire ride when they bark a lot. They go for a ride of approximately 1 hour and 30 minutes a day. They go along the Sycamore Golf Course, which is just at the back of the Bostick property.

Here’s A Video About Their Heart-Warming Dog Train..