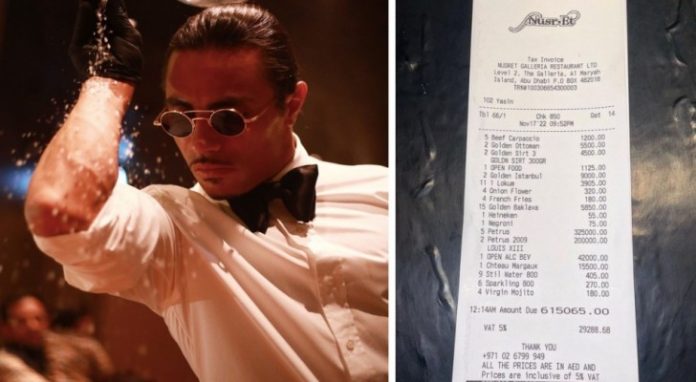 Everyone’s weekly routine is tiring and exhausting, which is why you need to take a break from time to time. The latter often consists of going out and treating yourself to dinner at a restaurant. It doesn’t matter whether it’s with family, partner or friends, the important thing is to feel good and enjoy a good meal.

Today, the number of establishments has grown by leaps and bounds and they offer any kind of experience one could desire. There are restaurants of all kinds: from those that satisfy the palate with luxury, hard-to-find ingredients, to those that pay attention not only to taste but also to the customer’s wallet.

Before going to a restaurant, it is good to know what type it belongs to, so as not to be surprised by the bill. But apparently those 14 diners didn’t care, so much so that they ended up paying an exorbitant amount for dinner.

Salt Bae , whose real name is Nusret Gökçe , is a chef who has become famous on social media for his way of salting ingredients, but especially for dishes such as steaks wrapped in edible gold foil . The fact took place in one of his restaurants, more precisely at Nusr-Et Steakhouse in Abu Dhabi, United Arab Emirates, so much so that he himself published on his Intasgram page the note of 615,065 dirhams (about 160,000 euros) for dinner for 14 guests.

An exorbitant amount that no one would expect to pay for a dinner. This group ordered several meat dishes, including the gold-wrapped steak, several bottles of wine, some worth 85,000 euros, and followed up with other small dishes. The cost of this meal was probably the highest ever. It is precisely for this reason that the chef has chosen to publish the bill on his social networks.

This decision, however, prompted comments from his followers, to the point that many criticized him, because they felt that it was not possible to charge such an amount for a dinner: “None of this “is normal. It’s an exorbitant price”, “with this money, we could help so many people”, or “I would have used this money differently”.

After all these many reviews, next time Salt Bae will think twice before posting a receipt, revealing how much one can pay at his restaurant.

And you what do you think ?