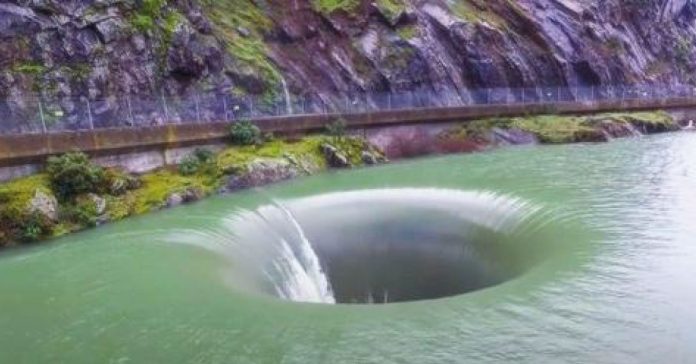 Every year thousands of tourists visit Napa County, California with the intention of seeing the spectacle of the Glory Hole, which is southeast of Lake Berryessa and when the water is high enough it can measure 22 meters in diameter. width.

A few years ago in 2019 the capacity of the lake was full and everyone thought that the water would spill over the sides of the funnel, but as thousands of liters poured into the spillway, the Glory Hole received the water and instead from being a funnel it had the appearance of being a portal to another world.

The hole is estimated to measure 60 meters in a straight drop and goes from 22 meters to 8.5 meters in diameter when it shrinks. What few can explain is why something like this exists and they want to know the reason for a giant tunnel in the middle of a lake.

According to ABC 10, a local news station, the spillway helps drain some of the water from the lake when its levels are above 1,360 m³/s. It works when there is excess water in the tank due to heavy rain.

The water that pours into the huge pipe flows into Putah Creek, which is hundreds of feet below the lake and Monticello Dam.

“It always depends on the upper slope how much water we are going to see come through here,” said Melissa Vignau , supervisor of the Solano Project, in a 2019 interview with ABC 10. “But it could be a few months. In 2017, we had similar rainfall, and we started in February and went through May with spills. It is very likely that the same thing will happen again this year.

The reasons the engineers built a structure of this size is because of the space limitations they faced, so they chose to do it in the shape of a hole instead of a more typical spillway.

“Monticello Dam is located at Devil’s Gate, in a narrow canyon. Although the site was a good site to build the dam, it did not have enough space to build a large canal and overflow berm. So the engineers decided that the best way to get the water to the other side of the dam was to dig down ,” Josh Lyle told local media.

The fascination with the hole located in the lake has been the subject of several popular recordings and videos, in fact, Rick Fowler captured the moment where a duck was sucked into the vortex, fortunately the animal survived.

Other media do not believe that something like this was possible due to the nature of the spillway and the enormous current of water it carries. A woman was a victim in 1997, being dragged by the waters into the spillway.

The shape and appearance of the Glory Hole has given rise to several experiences and theories about it. Although it is almost impossible to approach a safe distance from the perimeter of the hole, some ingenious have wanted to tempt fate and someone was able to get a privileged view through a drone.

Unfortunately, a large part of the state of California has serious drought problems, so it is unlikely that the spillway will be seen in the near future.