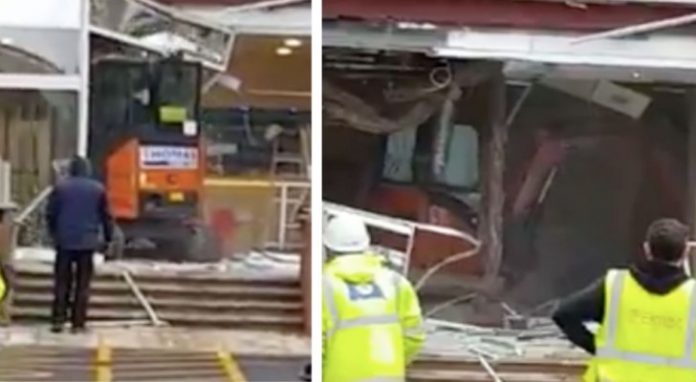 One of the fundamental aspects of life is work, precisely because it is thanks to it that one can subsist, but above all because it is only through employment that one can sustain one’s family. Receiving a fixed salary is always comfortable, because we are sure that each month it will fall, but there are also those who are paid according to their work. It may happen that the customer decides not to pay. What should be done in such cases?

This man found the solution and decided to show his disagreement with the non-payment by destroying his work. Let’s see what happened.

Everyone, after doing a certain job, expects to receive adequate payment, a pity that this was not the case for this man and all his colleagues. The event took place in Liverpool, England, where a group of workers took part in the construction of a new hotel. When the man at the center of the story discovered that his own efforts, and those of his colleagues, would not be rewarded, he flew into a rage. After waiting the necessary time, he decided to take action and do something that would leave his mark.

Very calmly and quietly, he walked to the excavator used for the work, climbed on it, started it and drove it to the structure. The whole thing was filmed and the video was then posted on Facebook, going around the web and garnering many views.

In the video, the worker is seen destroying the entrance to the hotel, the electricity, the doors and various other elements. Apparently, the man was supposed to receive around 700 euros, but when he couldn’t contact his employer, he decided to take action. The damages would amount to approximately 500,000 euros. For this reason, the employee was reported and investigated by the police.

Despite this misconduct, most Internet users sided with the worker, believing that work should always be paid, especially for a matter of respect. To avoid this, the employer should have only respected the payment schedule and kept its word.

What do you think of this incident?