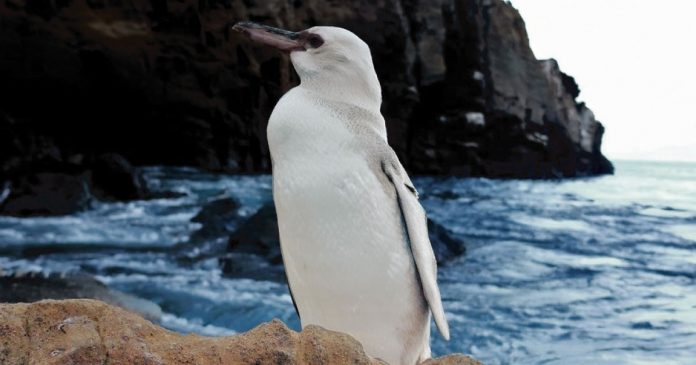 During the exhibition of tourist activities north of Isabela Island, in the Galapagos Islands – Ecuador, a guide was able to observe something never seen before, it was a completely white penguin , which according to experts the bird suffers from a genetic condition called leucism .

This condition causes partial loss of the pigmentation of the animal’s plumage or fur, what makes it different from albinism is that with leucism the natural color of the eyes is maintained. The workers of the Galapagos National Park (PNG) comment that previously there have been known cases of leucism or albinism in some animals such as lizards, sharks, lobsters, among others; being that of the penguin the first case registered up to now .

The penguin that inhabits the archipelago is one of the smallest species in the world . It measures approximately 35 centimeters in height. In addition, these small animals are the only ones of their kind that live above the equator, so those in charge of supervising and observing this population do so in the best way to ensure their well-being and survival .

During the current year , the highest number of existence of these beautiful animals was presented , going from 1,451 to 1,940, which means that the population is healthy.