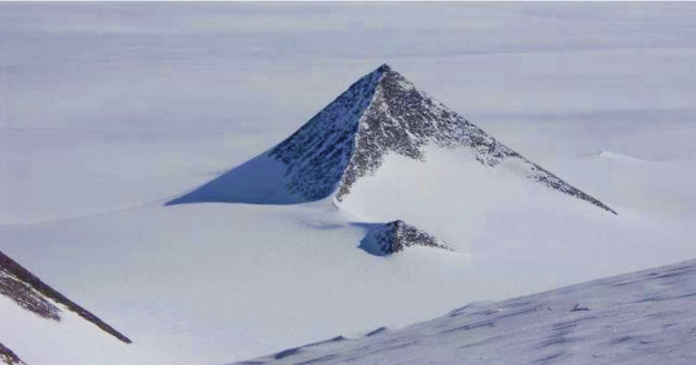 The internet now has a new conspiracy theory

Conspiracy theories have become more common in recent days. Cases such as 5G antennas or about the thousands of possible origins of the new virus. Now a new one is added: “The mysterious pyramid of Antarctica”

Although it is not new, the “pyramid” was discovered between 1910 and 1913 but was kept secret because geologists believed they had found a great secret that could have been kept. This has fed the collective imagination since then, but little by little it lost interest more and more.

Expert Mitch Darcy, a geologist at the German Research Center for Geosciences in Potsdam , comments on the subject:

“The pyramid-shaped structures are found in the Ellsworth Mountains, which are over 400km long , so it’s no surprise that there are peaks jutting out of the sky . The peaks are made of rocks, and it is a coincidence that this particular peak is shaped like that.”

“ It is not a complicated shape, so it is not a special coincidence either. By definition, it is a nunatak, which is simply a rock peak jutting above a glacier or ice cap. This one is shaped like a pyramid, but that does not mean it is a human construction, ”he concludes.

Under these perspectives it is easy to refute the theory. These rock formations are more common than we think . The Matterhorn in the Alps or Mount Bulandstindur in Iceland are clear examples.

Do you have conspiracy theories that you believe are real? leave them in the comments and discover how real they are. Share this note so that more people find out about the truth of these “Mysterious pyramids”