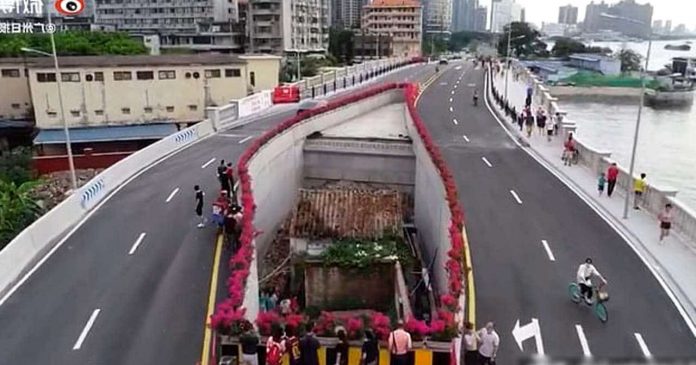 If you have ever been to a roadside place you know that there is never rest, things are happening all the time. You never know what will come next, especially when there are hundreds of vehicles crossing in front of you every day.

Now imagine being in a place where you are not only facing the road, but you are surrounded. This is what happened in the Chinese city of Guangzhou, where the authorities had to build a highway around a humble house.

The owner refused to sell it for years until the government had no choice but to build the highway without touching this site. In that part, as if it were a cartoon, the track divides and joins again after passing the small ‘hole’ where Mrs. Liang lives.

For years they tried to negotiate with the owner of the house but never reached an agreement that would benefit both parties. She rejected every offer that came to her from the government, she assures that none was adequate.

However, the project was progressing and after much insistence, the government had to make a decision and leave Mrs. Liang’s property alone. Now the site has become a tourist attraction for locals and visitors, so now the authorities have fenced the site to prevent accidents.

The owner’s refusals are due to the fact that she wanted to be relocated to a place near her home, however there was no such agreement and she decided to stay there. Many people criticized her for not leaving her home, hinting that she was poor.

Many locals say that Ms. Liang would have asked the government for 4 apartments, and that the authorities would only give her 2, so they did not reach an agreement. Many people visit the site to take pictures with this house that “divides” the road.

Previously, Mrs. Liang lived with 47 other neighbors, they all sold their homes, but she refused, and this is how this Guangzhou curiosity was born.

For its part, the city government reported that the engineers studied the case and came to the conclusion that the woman is not in danger by staying in this area and assured that they will continue to contact her to reach an agreement and relocate her.