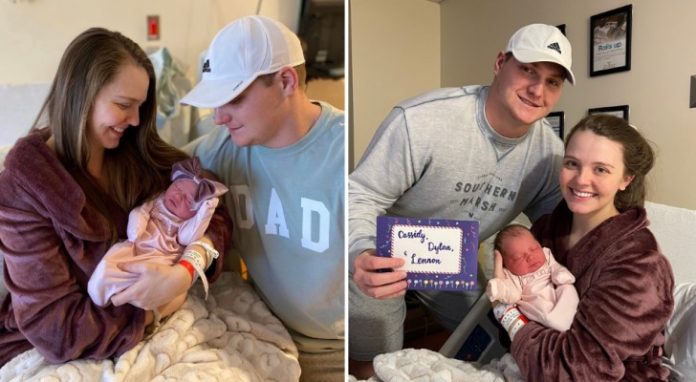 Do coincidences exist or is it all purely by chance? Sometimes the doubt is really strong and it is difficult for certain facts to be completely coincidental, especially with regard to the surprisingly recurring numbers and dates. When an event occurs whose percentage of possibility approaches very low values, its occurrence seems almost exceptional: this is the case of a couple of new parents and their first child, who share the same day of birth. . How many people can the same thing happen to? Certainly not a lot.

In some cases, thinking about fate comes quite naturally, and it’s not hard to imagine that this young set of parents did too. Cassidy and Dylan Scott, from Alabama, have the same birthday, December 18, and it must have seemed strange to them to have found a partner to celebrate their anniversary together. A bizarre but not so rare coincidence, after all: each of us has met someone, during our life journey, who has the same date of birth as us.

The surprising thing was rather the confirmation that maybe, as far as they’re concerned, it’s not really a coincidence: if the two considered it special to be born on the same day, they were incredulous when their baby girl was also born on December 18. They never imagined that fate would present their family with another coincidence, making their bond even more unique.

Cassidy and Dylan said they have a lot in common and being born on the same day of the year is just one of them. The Huntisville hospital where their first daughter, Lennon Kate, was born, found the episode so exceptional that they wanted to share it on social networks via a Facebook post : “Congratulations to Cassidy and Dylan Scott who come to welcome their first born daughter! It’s an emotional moment for any family, but it’s really special for them because they all share the same birthday . Yup! There’s a 1 in 133,000 chance of that happening. Lennon held out until 12:30 p.m. on December 18, just in time for the party.

The little one therefore arrived as the best gift her parents could have received, happy and excited to be able to celebrate this first birthday with her too. Many netizens commented in amazement, with some of them reporting the same experience and suggesting the couple get used to the fact that people will be surprised when they tell about it.