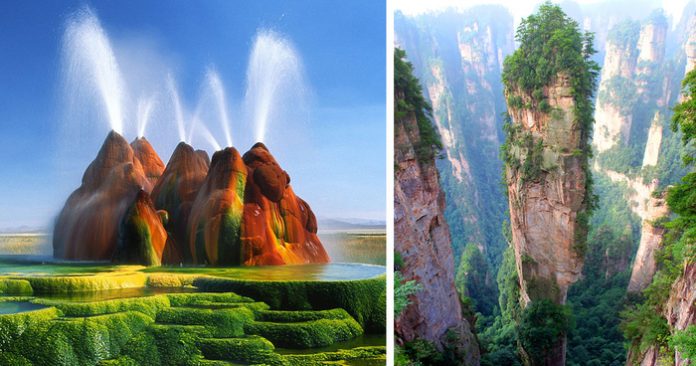 When you discover more about the world, you can find more amazing things as this world is uncanny. The gems it holds within it are just so unbelievable and look like they belong to another planet.

Here is an album of these miracles from lunar valleys to underwater caves.

Salar de Uyuni is the world’s largest salt flat stretching across 10,582 square kilometers of the Altiplano. This place is popular among backpackers and tourists due to the beauty and surreal nature of it. This incredible Bolivian salt flat is most famous for its jaw-dropping ‘mirror effect’ and crazy perspective photos. You can see the astonishing mirror effect when a thin layer of water covering the salt transforms the salt flat into ‘The World’s Largest Mirror’ reflecting the sky.

This is an artificial lake on the North Saskatchewan River lining the David Thompson Highway between Saskatchewan River Crossing and Nordegg.The construction of the Bighorn Dam created this in 1972. This lake possesses the blue color of other glacial lakes in the Rocky Mountains even if it is man-made.

This is reed-covered wetland in one of the world’s largest reed marsh areas, the Liaohe River Delta. It’s colorful and the name refers to the striking seasonal hues of its coastline, which is covered with the plant seepweed (suaeda salsa). This is situated in Dawa County, about 18 miles southwest of Panjin City, in the northeast province of Liaoning, China.

Antelope Canyon is a magnificent slot canyon just east of Page in Northern Arizona with few geological formations and awe-inspiring. Antelope Canyon has been created with the millions of years of water erosion. The Navajo name for Upper Antelope Canyon is “Tse’ bighanilini,” which means “the place where water runs through rocks.” The canyon was once home to herds of pronghorn antelope. But now it lies within the LeChee Chapter of the Navajo Nation.

In 1794, Naica began operations and in 1952 it was taken over by Grupo Peñoles. It is also serviced by a number of shafts, declines, and spiral ramps. Naica is situated on a structural dome measuring about 12 km by 7 km. Country rock is a thickly bedded Cretaceous limestone.

Benagil Cave which is the most popular cave in the Algarve is also world-famous and has appeared on several lists of the best caves in the world. The cave is located on Benagil Beach, very close to the town of Lagoa.

The beach is a part of Vaadhoo Island, which is one of the islands of Raa Atoll in Maldives. There are only around 500 people in this island. Because if its Sea of Stars phenomenon, the island has earned itself a place on the global tourism map. This island was Maldives’ one of the best-kept secrets for a long time, but now it has become one of the most sought-after places to visit in Maldives.

Its most notable feature is UFO-like dragon’s blood trees. So, this Socotra looks like it was transported to earth from a distant planet.

It is the largest hot spring in the United States and also essentially a rainbow ring of vibrant colors. Extremely hot water travels 121 feet from a crack in the Earth to reach the surface of the spring. The Grand Prismatic is bigger than a football field at 370 feet in diameter and it is the third largest spring in the world. A gridiron is 360 feet long and 160 feet wide.

This is situated at the foot of the basalt cliffs along the sea coast on the edge of the Antrim plateau in Northern Ireland. 40,000 massive black basalt columns sticking out of the sea has been used to make this. The dramatic sight has inspired legends of giants striding over the sea to Scotland. The development of the earth sciences has been contributed by the Geological studies of these formations over the last 300 years. They show that this striking landscape was caused by volcanic activity during the Tertiary, some 50–60 million years ago. (UNESCO)

Son Doong Cave, Vietnam is the biggest cave on the planet when measured by cross-section. This is discovered and explored for the first time in 2009 and open to the public since 2013. The cave is unique for the two enormous dolines (cave roof collapses) and underground rainforests. It is also the home to the “Great Wall of Vietnam,” a 90m high calcite barrier.

The National Geological Park is in the eastern foothills of the Qilian Mountains in Gansu Province, China. It has a spectacular Danxia (/dan-sshyaa/ ‘red cloud’) landform area that covers about 50 square kilometers (19 square miles) which are a masterpiece of nature. This mountain looks like an overturned palette from heaven.

Lake Baikal is located in southern Siberia. It is covered with ice for almost five months a year. The surface of the world’s largest freshwater lake freezes every winter as the temperature plummets below zero. But until the middle of winter, ice doesn’t begin to form, long after the beginning of severe Siberian frosts. Baikal still resists ice formation even other rivers and lakes froze long before in the year.

Pamukkale is known for the mineral-rich thermal waters flowing down white travertine terraces on a nearby hillside which is a town in western Turkey. Hierapolis is an ancient Roman spa city founded around 190 B.C. There are well-preserved theater and a necropolis with sarcophagi that stretch for 2km. The Antique Pool is famous for its submerged Roman columns which occurred due to an earthquake.

When scalding water began erupting through a man-made well in 1964, this fly Geyser was accidentally created. The mount and terraces that now surround the geyser which is developed with dissolved minerals continues to grow and release water up to five feet in the air.

It is known as one of New Zealand’s best natural attractions as it is a place where time and space stand still, a true measure and timeless secret of Aotearoa, 30 million years in the making.

The Wave is located in the Coyote Buttes North area of the Utah Arizona border. It is the premier photographic destination in the US Southwest. Coyote Buttes North also contains many other spectacular rock formations such as The Second Wave, The Alcove, Top Rock Arch, Melody Arch and the Grotto, Sand Cove, and Fatali’s Boneyard.

Dallol volcano is located in a remote area subject to the highest average temperatures on the planet,Danakil Depression in NE Ethiopia. The volcano encompasses Dallol mountain (which rises 50-60m above the surrounding salt plains and has approximate dimensions of 1.5 x 3 km) and several other features in the vicinity, such as the 1926 crater near the “Black Mountain” about 1.5 km to the SW. it is on top of an at least 1000m thick layer of quaternary which evaporates including large potash (potassium salt) reserves.