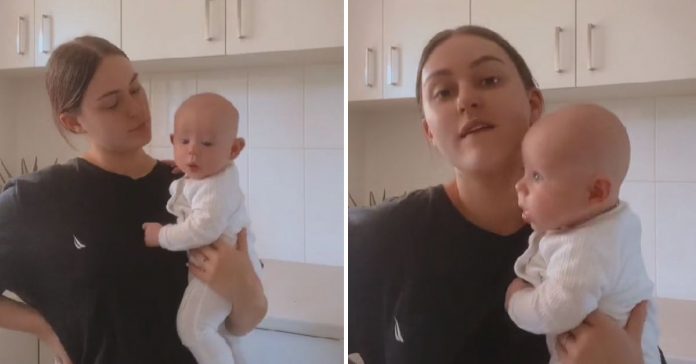 Each parent is free to decide how to educate their children, as long as their teachings do not affect others.

When someone becomes a father or mother, they must determine what the upbringing they will give their son or daughter will be like. Although society expects this to be a certain way, according to the values ​​of the time, parents are free to do as they please. However, there will always be someone who disagrees and criticizes, especially when you share these methods on social networks, a public space where people from all over the world can learn about your ideas.

This is what happened to Louise Barry , a 23-year-old Australian girl who just became a mother. The young woman wanted to share on her TikTok account the ways in which she is going to raise her four-month-old son. Of course, the expected response among users was generated: controversy.

In a short clip of just 10 seconds, the woman with her baby in her arms showed the “controversial ways in which she will raise her son.” With background audio where the phrase “there is nothing wrong with me” is heard accompanied by the description “no one is going to make me change my mind”, the young woman released four rules.

1.The little one will be raised as a boy because that is what he is.

2.The mother will not stop cursing around the baby, “it’s just words.”

3.He will be taught to treat others as he wants to be treated.

4.And you will be taught that there are only two gen3r0s.

These controversial rules immediately drew attention and while some applauded her, many others criticized Louise and even called her a tr4nsphob1c4 .

Another detail that Internet users did not agree with was that he assured that he would not stop swearing in front of Levi. But without a doubt, his rules 1 and 4 were the ones that caused the most discomfort among the TikTok community.

Some time later, Louise shared another video clarifying some points as she was receiving too much media attention and wanted to be more clear about what she said. Louise explained that the bad words were not said directly to her son, that at no time has she been offensive to him. However, these words are deeply rooted in her vocabulary and she says them in the presence of the little one. Since she is part of her personality, she is not willing to change this point and she will continue to speak like this because she also knows that the little one at some point in her life will learn them anyway.

Lastly, she clarified that she is not giving any parenting advice to other parents. Louise said that she simply wanted to use a TikTok trend to express the way she was going to raise her son Levi.