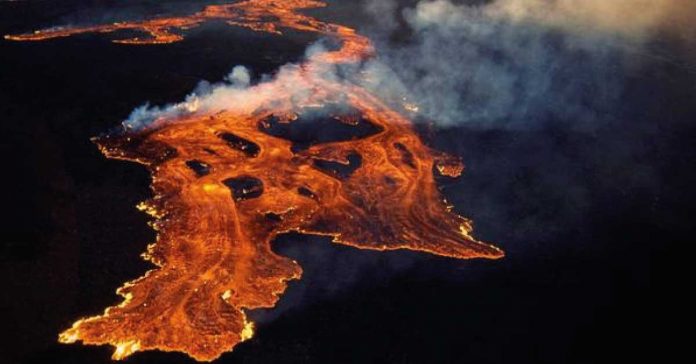 Hawaii is made up of a group of islands, which are unique in their kind, it is a territory formed entirely by volcanic rock. Its mainland shoots began to form more than 70 million years ago, largely due to the rise of the volcanoes that make them up.

Despite being one of the favorite vacation destinations for thousands of foreigners, the small but paradisiacal state has three large active volcanoes that constantly issue alerts, but in recent days, it has been the Mauna Loa volcano that has surprised the world with its First eruption since 1984.

It was the Hawaii Volcano Observatory (HVO) that issued the alert on the night of November 27, for more than 38 years the powerful volcano had been dormant, but it seems that it was for a long time.

The United States Geological Survey (USGS) did its part and immediately began collating the information, as well as sharing images of the long fissure in the territory, where significant sources of lava erupted along the floor of the volcano’s caldera. .

Both service agencies agreed that the lava was going to remain in the caldera and that it did not represent any danger to the surroundings or the population itself.

For its part, the HVO indicated that the eruption had begun in Moku’aweoweo, as the volcano’s caldera found inside has been named. “At this time, the lava flows are contained within the summit area and do not threaten communities downslope,” officials said. At this time the biggest threat was wind-borne volcanic ash and gas.

Although at the moment, everything seems to indicate that the lava from the volcano is contained within the walls of the caldera, some residents of the Kona side managed to register images that seemed to show lava flowing down the mountain.

That is why the Volcanoes National Park has already begun to take the corresponding measures, such as the closure of cabins, as well as high-altitude areas surrounding Mauna Loa, due to the great increase in seismicity.

To give a bit of context, of what Mauna Loa means, it is enough to know that it is one of the five volcanoes that make up the island of Hawaii and is the largest in the world in terms of volume. It is so large that it covers more than half the surface of Hawaii, with an estimated volume of 75,000 cubic kilometers.

Not much is known about its origin, however, researchers and experts believe that it emerged from the sea 400,000 years ago and the last time it erupted was between March and April 1984.

This imagery shows the heat signature and the sulfur dioxide released from the #volcano's summit caldera, Moku‘āweoweo. pic.twitter.com/gHEG63rbLb

With Cherry Trees And Free Deer: One Of The Most Beautiful Parks In The World Is Located In Japan.

The World’s Largest Desert Is Covered In Ice, Not Sand

Wolf Moon: The Spectacular Full Moon That Will Appear This Week