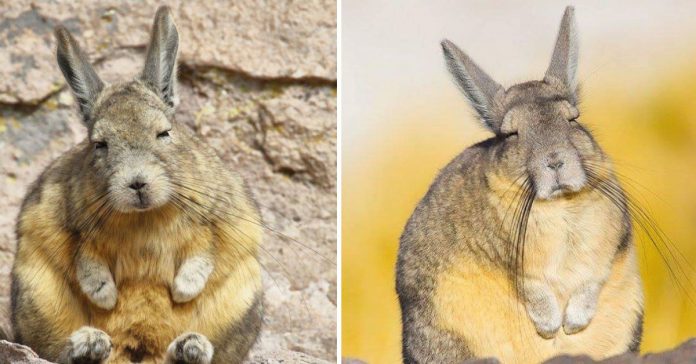 They are considered agile rodents, they can jump from rock to rock quite quickly, they have great vision and when they feel threatened they emit a kind of whistle to alert their herd.

There are 3 species of vizcacha in South America, however they have very similar characteristics; They have elongated ears, measure between 30 to 50 centimeters and can weigh up to 8 kilos. They have a soft, thick and abundant coat. You will almost always find them in rocky areas or high altitudes.

The mountain vizcacha is a nocturnal animal and is more active at night, however during the day it sunbathes and eats.

The color of their fur depends on the season and the age of the vizcacha.

Its body is covered with its dense fur, its back is brown or grayish, while the belly is usually yellow, gray or white.

These rodents form their burrows in the cracks of the rocks.

It is a herbivorous animal, whose diet includes various types of grasses, mosses and lichens.

They rarely drink water, they absorb all the moisture they need from the plants they eat.

The mountain vizcacha looks like a rabbit with a long, fluffy tail, which remains coiled when the animal is resting and fully extended when moving.

The main predators of the vizcacha de la sierra are wild cats and birds of prey.

It has quite short front legs compared to the back ones. Their feet are covered with fleshy pads, making it easier for them to move on rocky terrain.

Its tail is usually between 20 and 35 cm long. One of the positive things about its length is that it can be easily detached, saving it from being caught on a regular basis.

Vizcachas live in large colonies, made up of a large number of family groups. Each colony consists of 80 or more members.

In captivity, they are animals that can live up to 19 years. However, their life expectancy in the wild is unknown.