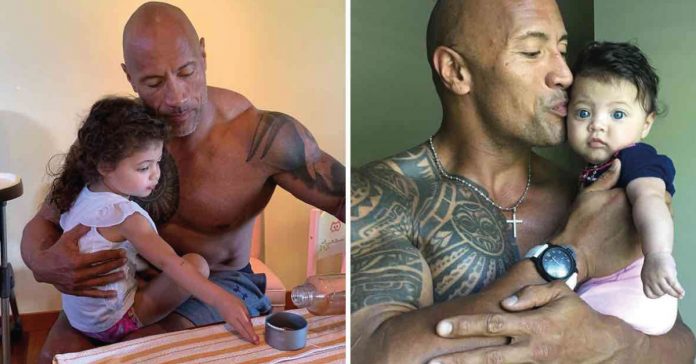 “Happy birthday to my brave little girl, tornado of charisma and charm. The best fishing buddy any dad could ask for. I’m flying home so I can tuck you in tonight!”

Dwayne “The Rock” Johnson is currently one of the most beloved actors in Hollywood. At 50 years old, the former wrestler stands out in the media for his warm and simple personality, as well as being affectionate with his fans. However, his love is not only for his fans, but he also shows all his love with his family.

There are many proofs of this, but the most recent is the tender message that “The Rock” wrote to one of his three daughters. Jasmine, 7, received a touching message from her father just on her seventh birthday.

“Happy birthday to my spunky little tornado of charisma and charm, Jazzy Lia. The best fishing buddy any dad could ask for,” the actor commented on his Instagram. “Slow and steady wins the race, ten fingers down and I’ve always got your back,” he added.

“I love you more than I can express and I’m flying home so I can tuck you in tonight! Happy birthday baby ”, concluded the protagonist of Black Adam.

In the same way, he shared photos of various intimate father-daughter moments. We can see both of them fishing or Jasmine proudly showing off what she managed to catch in the river. Also photos of her when she was just a baby and her blue eyes stood out and even a photo of their feet after a crazy pedicure session at home.

Several celebrities joined the birthday wishes, such as Reese Witherspoon, Jason Momoa, who is a close friend of Johnson, and obviously Lauren Hashian, the wife of “The Rock” and mother of Jasmine and Tiana, her little sister.

The couple met for the first time in 2006, on the set of the movie The Game Plan. A year later, they began their relationship and in 2015 they welcomed Jasmine. Three years later little Tiana arrived.

It should be added that just in August 2019, after 12 years of relationship, they got married in a beautiful ceremony held in Hawaii.