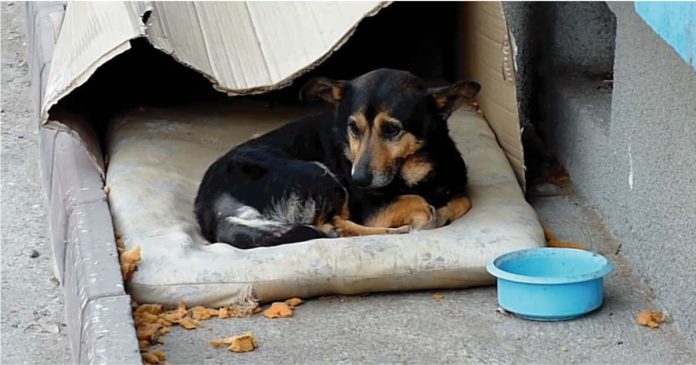 Buzu was a street dog who lived on one of the busiest streets in Romania. His day to day consisted of doing some tricks so that someone would notice him and take him with him, however his attempts always failed, because people seemed to be so busy that they did not even notice his presence.

However, Buzu did not give up and every day when he went out to look for food, he also looked for a person who wanted to have a faithful life partner.

Every time Buzu felt that someone could become his new mom or dad, he would do his best, roll around, wag his tail, bark and do other tricks, but sadly no one noticed.

One day a person saw that the puppy slept every night in the same corner of that street and, although he did not adopt him, he gave him a better life by making him a little cardboard house with a pillow inside so that he would sleep better and a small bowl so that people could offer him something to eat.

Buzu was so happy to have a new little home on the street that was not far from him and this filled him with more and more hope every day to find a family.

One day Buzu sniffed a woman and began to follow her so that she would notice him, together they walked for many meters, causing Buzu to separate for a long time from his little house.

When Buzu came back very sad that he hadn’t caught the woman’s attention, his heart was even more broken when he realized that someone evil had stolen his cushion and his eating bowl.

When Buzu finally felt that even in his loneliness he could have a home, a ruthless being stole his only belongings, making Buzu feel abandoned again.

However, not everything was lost for the puppy, because one day, a person noticed the little one and although he did not take him with him, he contacted an animal shelter to take him there and a couple of days later a woman who was part of this refuge found him on the street and approached him to change his life forever.

With a few words and a few cookies, Buzu agreed to let her pet him and take him to the shelter, where several veterinary doctors examined his condition and noted that the lack of good nutrition had damaged his skin and teeth.

However, after a good bath and lots of TLC from the shelter staff and the Howl of a Dog Foundation, Buzu was ready and healthy to find a family that could give him all the love he had always been looking for on the streets.

Life finally had a second chance for this little boy and that is how Emma and Buzu crossed their lives. Emma was a woman from England who had found the puppy on the foundation’s website. After reading the story of this warrior, she did not think about it anymore and applied for his adoption.

After a long process, the people in charge of the shelter agreed to give Buzu up for adoption and there began his new life, a life full of love and joy in the company of people to whom he will always be grateful.

In the following video you can learn more about the story.

A story worth remembering.