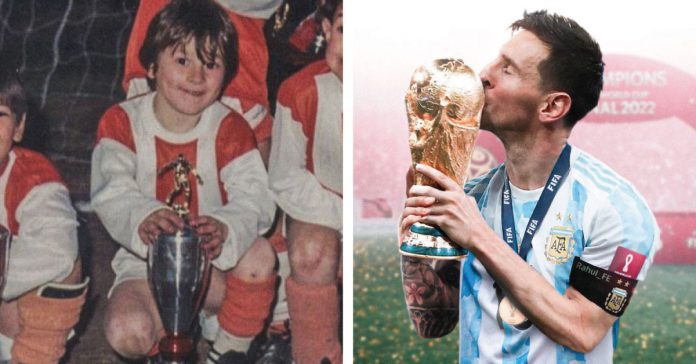 On Sunday, Argentina was crowned World Champion for the third time, but the first time after 36 years, a year before a little boy was born in Rosario and decades later would become one of the best players in the world.

Lionel Andrés Messi Cuccittini was born on June 24, 1987 and little did he know everything he would have to go through to get to where he is now.

La Albiceleste managed to beat the former world champion France in a penalty shootout in a match that had absolutely everything, although Argentina had more time on the ball and also more chances, the French woke up before the 90 minutes were up and I take it to extra time.

With the effort, discipline and perseverance of those selected, it finally paid off and all of Lionel Scaloni’s squad can celebrate the great victory against the Argentine people.

However, although Messi has been at the top of football for several years, few know his origins. Little Lionel started playing ball in Rosario when he was barely 6 years old. After noticing his quality, his father began looking for opportunities for him in different local teams.

His grandmother continually encouraged him, until he arrived at Club Grandoli, shortly after he signed for Newell’s Old Boys, quickly attracting the attention of European clubs, however, he was very small for his age and thin too, so many refrained from taking him .

Barcelona did not doubt and they were delighted with his talent, thanks to the Blaugrana team Messi was able to debut and play football professionally. Leaving his family, acquaintances and homeland behind, he moved to Spain to follow his dream.

His family did not have much money to pay for his stay, but little by little, he gained opportunities that made him stay in La Masia (Barcelona’s sports city) for a long time, to the point of becoming a phenomenon in the basic forces and later in the First Division team.

Shortly after he was reunited with the love of his life, Antonela Roccuzzo, whom he had met in his childhood, both managed to overcome the distance until they could be together.

Lionel Messi is a world champion, and thus has the most precious trophies in the world on his curriculum, giving an example that even if life throws obstacles at you, it is important to persevere until your dreams come true.