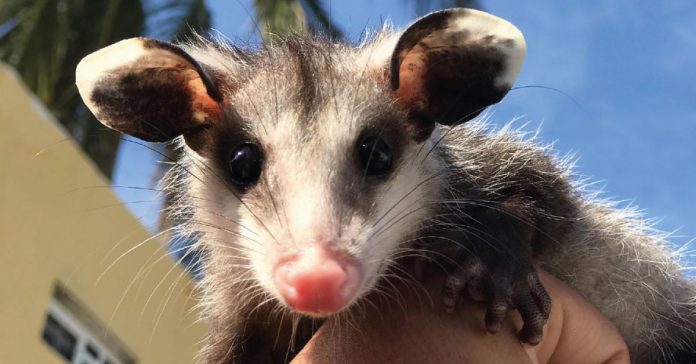 This little animal is not a rodent, much less transmits rabies. The opossum is a harmless animal that is threatened by misinformation.

Within the oral traditions, stories or legends are transmitted about the origin of some natural phenomenon or the history of some animal. In pre-Hispanic culture, there are hundreds of stories that narrate the creation of the universe within the Mayan or Mexica worldview. However, there is one in particular about the only extant marsupial in America.

In a legend of Nahuatl origin, it is said that many years ago, when life began, people did not know fire. They ate their food raw, at night, the cold tormented them and they couldn’t find heat anywhere. The only thing that men wanted was for the night to end soon so that the sun would come to caress them and give them warmth.

But one day, the fire broke off from a star and fell on the earth, causing several trees to burn. However, the Quinametzin, who were giants of the mountain and enemies of humanity, captured the fire without letting it go out.

To prevent people from stealing their treasure, they organized a powerful army that was led by a tiger. Although several tried to get the fire, all were killed by arrows.

This is how the armadillo, the deer and the opossum, who were inside a cave, decided to get the fire for the men. Although they did not know how they would get it, the opossum volunteered for the mission. The other animals made fun of him because of his size, the opossum was sure he would make it. The only thing he needed is that once he got the fire, everyone would help him feed it.

At sunset, the opossum carefully approached the camp where they had sheltered the fire and curled up in a ball. This is how he spent seven days without moving, until the guards got used to seeing him. At this time he observed that with the early hours of the morning, almost all the guards fell asleep. On the seventh day, taking advantage of the fact that only the tiger was awake, he went rolling to the bonfire. Upon arrival, he stuck his tail in and a huge flame lit up the camp. With his muzzle he took an ember and hurried away.

At first the tiger thought the opossum’s tail was a log; but when he saw him run, he began the chase. This one, seeing that the tiger was on his heels, took the ember and kept it in his marsupia.

But the speed of the tiger prevailed and reaching it trampled it, crushed its bones, shook it and threw it. Certain that she had killed him, she returned to tend the fire. The opossum rolled and rolled, wrapped in blood and fire; so he arrived where the people and animals were waiting for him. Dying, he uncoiled the tail and handed over the brand, the principals immediately lit bonfires, and fed the fire forever.

The opossum was named the hero of humanity, he who does not have natural defenses makes up for it with the use of intelligence, since that brave act he still shows his bare tail.

The only marsupial in Mexico.

It is commonly known as the Mexican marsupial and owes its name to the Nahuatl word “tlacuatzin” which means the small fire-eater. It also receives names such as Zorro del monte or Zarigueya. Generally, when we talk about opossums, we refer to Didelphis virginiana (in the south) and Didelphis marsupialis (in the north), however, in Mexico, there are six other species of the Didelphidae family:

The opossum has a robust physical constitution, its face is long and conical, in addition to the fact that its ears and tail are hairless. Although their weight is variable, depending on the species, they all use their tails to hang from the trees. An example of the above is the Mexican Marmosa of 15 centimeters, on average, or the Didelphis marsupialis of 45 (1 to 3 kilograms in the adult stage), approximately.

The opossum inhabits temperate or tropical climates, which is why it is easy to find it in various parts of Mexico. It is a nocturnal animal that builds burrows and during its waking hours it can travel up to 2 kilometers to look for food. It is an omnivorous animal, since it mainly consumes seeds, plants, fruits, insects and the meat of birds or small reptiles. Its main predators are dogs, cats, birds of prey and humans.

Up to 13 pups can be born from the same litter. The gestation period is incomplete and lasts 12 to 13 days. Being a marsupial, the opossum finishes incubating in the marsupium (an external bag of skin and soft hair in the mother’s womb), because when it is given birth it still needs to develop. For two months, it lies there, then hangs on the mother’s back. The breeding season is in spring and summer (between the months of February and May).

The best-known opossum defense mechanism is thanatosis, which is the action of faking their death. As it does so, the animal emits an unpleasant odor that helps it confuse predators.

Despite popular belief, they cannot harbor or transmit rabies, largely thanks to their slow-paced nervous system. In addition to being resistant to some poisons, such as those of rattlesnakes and coral snakes.

Due to the multiple agricultural activities of the human being, the opossum has had to move beyond its habitat. The current situation means that this animal has learned to live in urban spaces.

According to biologist Esmeralda Sandoval Benítez from the Autonomous University of Mexico, opossums are essential organisms for the ecosystem. They serve to regulate the growth in the population of pests and poisonous animals dangerous to humans. In turn, they are important seed dispensers and essential collaborators in crops such as coffee and cocoa. Their conservation is a relevant issue, which is why the dissemination of these species is becoming popular.