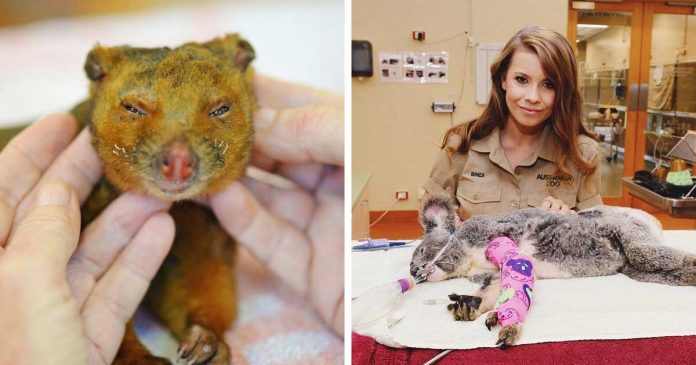 Every person all over the world has heard about the bushfires in Australia. This 2019-20 bushfire season is happening for the first time in the country. The main causes of the enormous damage this has caused are record-breaking heat and drought, lightning strikes, arson and lack of hazard reduction. It’s really difficult to say how long this season will last, which was started in August 2019.

Many people have dedicated themselves to help the animals and people in this continent. Late Steve Irwin’s daughter, Bindi Irwin wanted to assure everyone that their family is safe and do things to keep the animals safe.

Here is what the young conservationist posted an image on Instagram: “With so many devastating fires within Australia, my heart breaks for the people and wildlife who have lost so much. I wanted to let you know that we are SAFE. There are no fires near us or our conservation properties.

Sadly, their homeland is under a terrible tragedy.

“Our Wildlife Hospital is busier than ever though, having officially treated over 90,000 patients. My parents dedicated our Australia Zoo Wildlife Hospital to my beautiful grandmother. We will continue to honor her by being Wildlife Warriors and saving as many lives as we can.”

As bushfires destroy millions of hectares of land, the Irwin family are busy helping the animals

A burnt possum was treated at the Wildlife Hospital and Bindi shared a picture of it. But the possum didn’t make it as Irwin explained: “Blossom the possum was admitted to the Australia Zoo Wildlife Hospital after being caught in one of the bushfires burning in other parts of Queensland. We have such an incredible team that work day and night to protect gorgeous animals like Blossom. Devastatingly this beautiful girl didn’t make it even after working so hard to save her life. I want to thank you for your kind words and support. This is the heart-wrenching truth, every day is a battle to stand up and speak for those who cannot speak for themselves. Now more than ever we need to work together to make a difference and protect our Mother Earth”.

New Zealand, the United States, and Canada also help the Australian firefighters to fight the bushfires that the country accompanied with. Environmental specialist are calculating the enormous impact the fires had made on the environment, while all the others are putting their maximum level of effort to fight the fire and help out those in need. The sad news is that it is estimated half a billion animals were either lost to the fires or will likely starve due to loss of the food source and habitat. According to Australia’s environment minister, up to 30% of koalas were killed in New South Wales mid-north coast fires. This is a huge loss to the population of Australia’s iconic animal.