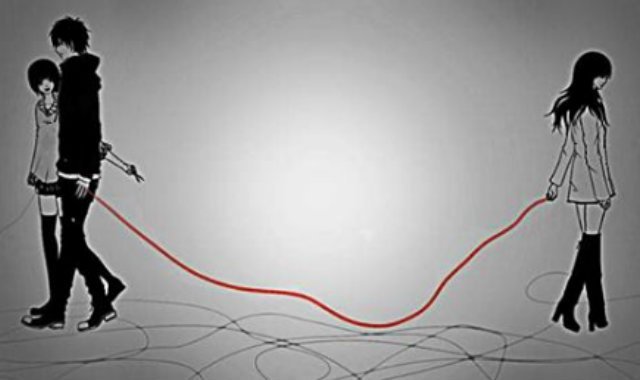 We all have heard that beautiful story which says if a couple is meant to be together they would be tied by an invisible thread and no matter what happens in their lives, they will eventually fall together. Nothing can break this thread and the stories about this thread are really interesting too.

Though we call the thread to be invisible, it is believed that the colour of the string is red. Red is always considered to be a colour of passion and desire. Lovers are tied with a red string signifying the unbreakable passion and bond between them.

This belief was originated in East Asia. Accordingly, it was believed that God ties a red string around the ankles of the people who are destined to be together.

This belief is similar to the western idea of soulmates or twin flames. The only difference is in western context we believe we have to find our soulmate whereas lovers are believed to be bind to each other in east.

The story behind this belief is really interesting. One night a little boy was walking his way home and saw an old man reading a book. The boy was curious and he asked the good old gentleman what is he reading? The old man smiled and replied it was the book of marriages and he was looking for the next couple to tie ankles. He further told the boy that he is destined to marry to one girl and boy thought the old man was a lunatic.

Boy didn’t believe in old man and therefore, old man tried to prove himself. He showed the girl to the boy and boy was really angry with the idea of marrying her. When she was alone he threw a stone and ran away as far as he could.

Years went, and the boy was going to get married. A marriage was arranged between him and one of the beautiful girls in the village. That night when he unveils her he noticed that his wife has a small scar over her eyebrows. He was curious and asked the girl what happened. She told that when she was young a boy had thrown a stone at her and boy understood she is the one meant for him as old man said.

7. What happens when the thread stretches and tangles?

No matter how many obstacles and barriers would come, eventually everything will fall into the right place.

The proverb doesn’t mean that once you find that destined one, everything would be okay. You still have to work a lot to maintain the relationship. Proverb only means that both of you will remain loyal and trustworthy no matter how things go on.

Even if you stay thousands of miles away, something would happen to put you together and unite your soul. Thread would never be affected by the physical distance between you and the destined one.

“The minute I heard my first love story I started looking for you, not knowing how blind I was. Lovers don’t finally meet somewhere. They are in each other all along.” -Rumi

Japanese people believe that red string is tied around their pink finger. The phrase “pinky swear” also says the idea person who broke their promise had to cut off their pinky finger.

This string will not be bound as we walk our way or so. It will emanate from us from the day we born. If someone’s life is destined to intertwine with us, then something or the other will happen to put us together.

Caroline Highland of Thoughts Catalog writes that “How much easier it feels to fling ourselves out into unknown, into a new place or stage of our lives, knowing those red threads are there, winding out into the future as they always have been, holding onto souls that will be waiting to catch us, teach us, touch us, change us.”

It is believed that this red thread is unbreakable and though there can be tangles, it will never break away.