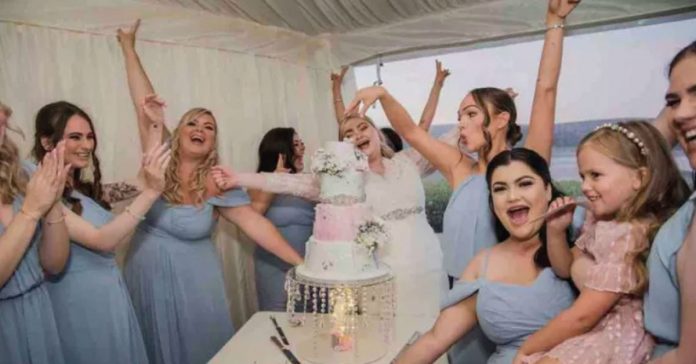 She celebrated in style despite the fact that her boyfriend left her the same day without explanation.

For many human beings, one of the greatest dreams in life is to walk down the aisle with the person they love. And when that time comes, they couldn’t be more excited. However, not everyone gets to feel immense joy when they are about to get married; and it is normal to feel nervous and even a little panicked but when you are sure, those feelings are nothing. Unfortunately, some people decide not to get married on the same day as the wedding and leave the event or simply never show up, leaving their partner with a broken heart and thousands of questions.

This is just what happened to a girl who longed to marry her boyfriend; however, he never arrived. Kayley Stead , a 27-year-old woman from the United Kingdom woke up one day full of illusions because her wedding would take place. And that same day her boyfriend decided that she would not get married; but without letting her know, he just disappeared.

Kayley did not want that day to be marked for her entire life as a negative memory. Instead, she decided to turn the bitter drink into a sweet one, so she wanted to continue the party. Maybe there wasn’t a groom but she cut the wedding cake and had her first dance. Her family, her friends and the rest of the guests supported her at all times and made the celebration unforgettable for the girl.

Kayley wanted to celebrate and have an amazing time, as planned.

According to the young woman, this was the best decision she could have made because the party was really used. We know that planning a wedding is done many months in advance and a lot of money is spent; So Kayley didn’t want all the work for a dream wedding to go to waste.

When she communicated the decision to her friends, of course, they were quite surprised but did not hesitate to support her. During her celebration they accompanied her and created an atmosphere of true joy. They even went further as the girls started a campaign to collect money through the GoFundMe page so that Kayley can pay for everything she spent on the party.

The young woman made the grand entrance with the song “Good as Hell” by Lizzo accompanied by the groomsmen and her bridesmaids. Although the usual wedding events did not occur in the traditional way, they did take place. Kayley danced with her dad at the well-known “first dance”; She later danced with her brothers and even the godparents of the ex-boyfriend. She also cut the cake and she and her guests had a great time. Everyone wanted to see her happy.

Kayley also said that when her sister and her best friend explained to the guests what had happened and how the bride wanted to continue with the wedding; most began to cry. Despite the shocking news, everyone was willing to make the day beautiful and celebrate Kayley.

Unfortunately after that day no one has heard from the man. Many of his relatives have tried to talk to him but without success; he seems like he just disappeared off the face of the earth. When his friends gave her the terrible news the morning of his wedding; Kayley was hoping that her lover would be there. However, a few hours before everything started, the father of her boyfriend spoke to her to confirm that he would not be present and that he would never return. The groom’s family also did not want to explain and like the young man, they were conspicuous by his absence.

“We have tried to contact him, but there has been no response from him, there is no reason why. I haven’t had any explanation, not that I want one, because it’s been a long time,” Kayley said.

Of course, when she found out, the “future bride” cried a lot because it was a tremendous surprise. But the important thing is that she managed to get ahead of the situation and although the day was bittersweet; she certainly had a good time in the end. Now, Kayley is much better and with the help of her family and friends she was able to overcome the experience and move forward.