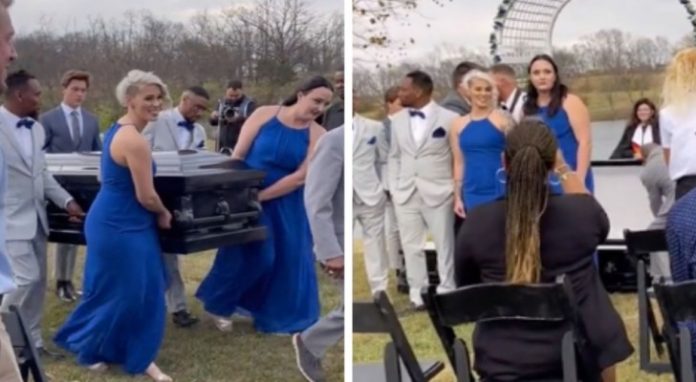 Everyone wants their wedding to be something unforgettable, perfect in every detail. We spend months organizing it and we want everything to be impeccable. But often, in order to ensure that the guests have fun too, the ceremonies are full of twists and turns. What this man achieved left everyone present stunned.

This groom chose to make his wedding unforgettable with a very special entrance. The whole thing was filmed and posted on Tik Tok. Too bad, however, that most users criticized his decision…

The ceremony took place outdoors, with a lake in the background framing the altar. Everything was ready, everyone had already taken their place, waiting for the arrival of the newlyweds. When, suddenly, we saw a hearse coming from afar and stopping near the guests. Those present did not understand what was happening, everyone turned to his neighbor and together they wondered what they were observing.

The four witnesses (2 women and 2 men) approached the car, and took out a coffin as if nothing had happened. They picked him up and dragged him down the aisle until they came to the altar. There they placed him on the ground and stood in front of him. At that moment, the lid was lifted and, as if by magic, the groom appeared in a white suit, ready to declare his love to his future bride.

Unfortunately, other details are not known, whether or not the bride was aware of this particular entrance, how she took it, but especially if there were any other twists and turns during the ceremony.

The whole thing was recorded by one of the guests, who decided to make this sensational entry public by posting the video on Tik Tok. Users were quick to comment and immediately commented on it. Some think it was a very fun, almost romantic way to get to the altar: “My life didn’t really begin until I met you.” Others claim it is a disrespectful gesture towards the bride and those present: “If my husband had come to the altar in this way, I would not have hesitated and I would have left” or ” I would have annulled the marriage”.

And you, how would you have reacted?