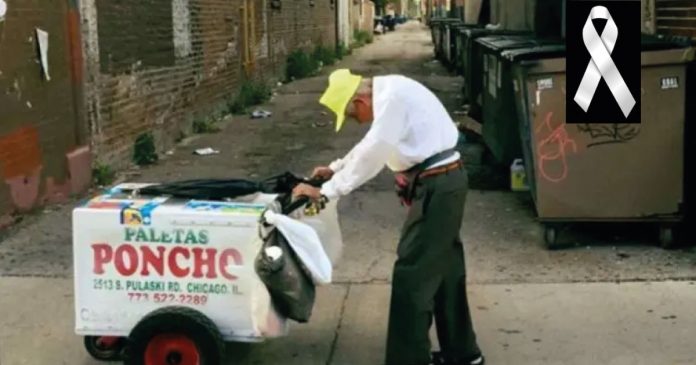 It is no secret to anyone that if you don’t work you don’t eat, there are those who have to work for the rest of their lives to continue bringing food to their humble homes, as is the case of Don Fidencio, a Mexican grandfather who worked hard for many years as traveling salesman and was much loved by Chicagoans.

Mr. Fidencio came to the United States hoping for a better future. Day after day he strove to get money to support his wife and children from him. Fidencio was dedicated to selling ice cream popsicles throughout the city of Chicago , with his cart that in a short time became famous by its name “Poncho Popsicles” , regardless of his advanced age, this man went out every day to sell the popsicles.

His story went viral when one of his clients, seeing Fidencio’s conditions, decided to create a GoFundMe campaign to ask for donations and thus guarantee a decent retirement for his grandfather , who was 89 years old at the time. The response was unexpected, a large number of people decided to join and contribute money, he received 380 thousand dollars with the help of thousands of people from different countries .

Fortunately, Fidencio enjoyed his retirement for 3 years , helped pay for his grandchildren’s college and bought a van to visit his family in Kansas. However, the story ends very unfortunate, upon receiving the news of the death of Don Fidencio at the age of 92 , on November 6.

He has left many of his clients and supporters heartbroken. He only has to ask him to rest in peace, he deserves it. Don’t forget to share this touching story.