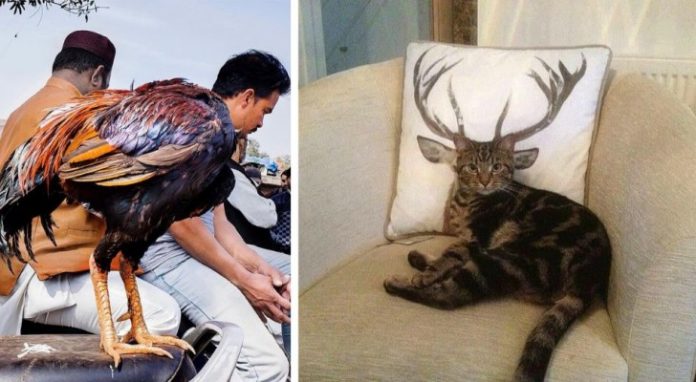 It is well known that in the field of art in general and photography in particular, one cannot speak of correct or incorrect perspective. If a correct perspective indeed allows us to place all objects in their correct position and relationship with their environment, it is equally true that by modifying the perspective to our liking, we can obtain sometimes extraordinary effects that make our even more beautiful works.

Photographers often exploit this characteristic of perspective to give us images of things that seem real even though they are not. But nature also often does its best to confuse us. We’ve collected 15 photographs below in which perspective plays tricks on our eyes and makes our minds work to put things back in order.

Has a specimen of a new species of feline deer landed in this living room, or is it just a cat sitting in front of a cushion?

This close-up of two crossed feet seems confusing for a moment: but how many toes does the right foot have?

A cake so well done it looks real. Will it taste as good as it looks?

But why does this boy’s left eye look like it’s about to wrinkle? Oh no, it’s just the dog’s ear!

What happened in that hallway? Has the chocolate spilled or is it about to be invaded by a black, slimy substance?

What happened to the fourth blade of this ceiling fan, did it go for a spin?

This skylight seems to be suspended in the air… and on the other hand, it’s just upside down!

8. Minecraft in the city

A Minecraft building that accidentally appeared in real life? A building with loading errors? Maybe these are just a few thoughts.

What happened to that girl’s second leg? How does she stand with just that leg bent?

It looks like a strange and huge flying creature and yet it is only a puff of smoke.

How big is this cat half hidden under this car?

This incredible optical illusion is a street furniture installation seen in Paris several years ago. It’s nothing more than a lawn inserted inside a sidewalk, but seen from the right perspective, it looks like a globe of grass has emerged from the ground.

Look at this little bird in the sky, how high it flies! Oh no… maybe it’s just a mark in the glass!

Another unique specimen of a previously unknown species: a man with the body of a rooster. Or maybe not?

A pen that has a life of its own…or maybe it’s just the effect of the glitter on the table?

Have you been troubled by these misleading prospects? Have you ever taken photos like this?